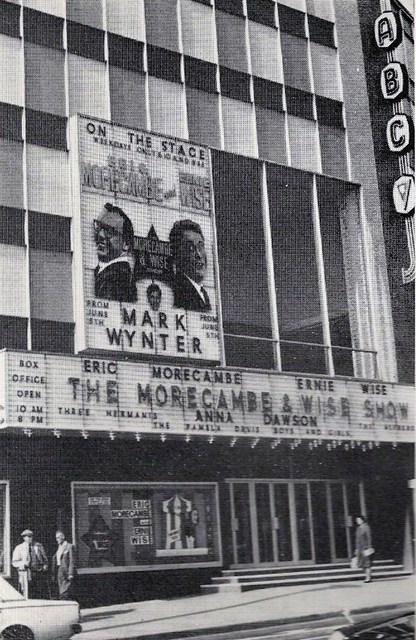 The Empire Theatre & Opera House opened on 4th July 1895 and was designed in an Italian Renaissance style by Manchester architect John Dent Harker. In 1900 it became the Hippodrome Theatre and presented a circus. A raked floor was added in 1910 and it became a cine/variety theatre, seating 2,500. Extensive alterations were carried out in 1923 to the plans of architect Halstead Best. It was taken over by Associated British Cinemas(ABC) in April 1929, and the seating capacity was increased to 2,820. The proscenium was 32ft wide, the stage 25ft deep and there were eight dressing rooms. It was equipped with a Western Electric(WE) sound system. Plans were proposed to rebuild the Hippodrome Theatre in 1939, but the outbreak of World War II halted this. The Hippodrome Theatre closed in 1960.

Much of the old theatre was demolished, except the outer walls and the new ABC Theatre was rebuilt in the shell of the old. The ABC Theatre opened on 31st May 1963 with the summer season stage show “Holiday Carnival” starring Cliff Richard and the Shadows. It was designed by architect C. ‘Jack’ Foster with seating for 1,934 in stalls and circle, it was a very modern theatre with gold seats and tabs. It was used for stage shows during the summer months, with films and concerts during the winter seasons. It was permanently wired up for TV transmissions and during the 1960’s ABC Weekend Television transmitted their ‘Blackpool Night Out’ shows from the ABC. The popular summer shows starred the likes of Frank Ifield, Morecambe & Wise, Cilla Black, Tommy Steele and Englebert Humperdink. The Beatles also played in concert here on 7th & 14th July 1963. It was one of the few theatres in Britain to have a permanent revolving stage.

The ABC Theatre was closed for conversion into a triple screen cinema in January 1981, completely ruining a fine modern theatre. Re-opening on 30th April 1981, ABC 1 (in the former circle) seated 728, ABC 2 & ABC 3 (in the former stalls area) seated 321 & 231. No more stage shows were possible after the tripling, although the old stage with revolve and safety curtain remained unused behind the conversion and was used for storage. Renamed the Cannon in 1986, then MGM from May 1993. By 1998 it had been re-named ABC again and final closure as a cinema came on 13th July 2000.

Most of the Summer Season shows went to the ABC Great Yarmouth the following season.

Although, as I recall, the Dick Emery Show in 1976 was presented at ABC Great Yarmouth the previous year ie 1975.

New link to the famous ‘Beatles Live at the ABC’ :–

It will be interesting to see how long this remains on YouTube but, for those who have not seen it before, there are some good shots of the stage from various angles plus Paul McCartney performs ‘Yesterday’ for the very first time publicly accompanied by the Bob Sharples Orchestra.

Its is a pity that there is no picture of the Proscenium end.

If anyone has a copy of ‘ABC News’ from May 1963 there are a number of photos of the proscenium both with house tabs fully closed and with Cliff Richard, Carole Gray, The shadows etc in front of a huge ‘Elstree Studios’ backdrop. I used to have a copy (together with about 200 others, all of which I foolishly parted with).

Perhaps if someone out there still has a copy of this magazine (an ‘in house'glossy monthly)they would scan the relevant pages and upload them.

Ironic that the theatre is preserved on videotape somewhere (as I understand that many of the ABC TV Sunday spectaculars survive) but no one, it seems, bothered to photograph the impressive 60' pros….

Terry I have seen a picture and thought I had a copy. Someone had put it and a number of other pictures in a safe place

I was the Chief Projectionist at the ABC Lyric, Wellingborough & when I heard about the plans for the ABC Blackpool I applied for a position and became Co-Chief Projectionist / Lighting Engineer. My interview was with the (in) famous Nick Mole who was in charge of all the ABC Circuit projection equipment. The other Co-Chief was the Sound Engineer Brian Wall who came from the Regal, Chesterfield, and who I understand remained at the cinema right up to the day when it ceased showing films…having been tripled for some years. The Manager was indeed Robert (Bob) Parsons, a Manager who I found to be very un-approachable and not made any the better because he’d expected the Chief projectionist at his former cinema to be given the position that I had! In turn Bob Parsons was replaced by Mr Chadwick, who it may not be known was the brother of the very famous Cinema, broadcasting and recording organist Doreen Chadwick. The Strand Board arrived one morning prior to the opening of the theatre, and it was manhandled by 6 of the projection & (visiting) Strand Engineers from street level up to the mid Circle entrance, and then right up to the back wall where there was a huge hole waiting for the console to pass through. The wall was then bricked up and decorated to fit in with the theatre decor. The Sound Engineer had a box sited on the back row beneath the projection room portholes, from where he controlled all the mics and sound levels /tape machines etc for the live shows. The room containing all the lighting switches, circuits and solenoids to actuate them was several floors up above the dressing rooms back stage, but almost in line with the projection room, from where the multi cable from the console travelled across the ceiling void and into this room. Now the problems began! The building was still being knocked about and rebuilt into what were the four exterior remaining walls of the original cinema/theatre (The Hippodrome) and so dust was flying and settling everywhere. The Strand Engineers (I believe one was a Mike Brown) had already spent many days in this switch room installing all the stacks and circuits. The settling dust caused them huge headaches as it got into all the contacts, despite the entire room eventually being shielded in poly sheeting. Came the very first day of rehearsal for the Cliff Richards Show. It had been agreed that prior to rehearsals I would go down to London to Strand and be given tuition on the board. This never happened and so the first time I even saw the Lighting Plot for the show was on the morning of the first rehearsal. The aforementioned Strand Engineer was designated to sit next to me at the console in order to show me what switches, pre-sets etc did and also how to set them up for scene changes and store the settings for immediate re-capture. I set up Scene 1 on the top bank and Scene 2 on the lower bank. On cue I pressed the first pre-set. The Producer of the show got on the intercom and told me to re-check everything as this was not what he had written down. Doubled checked everything and we began again. He called a halt as it was still wrong. The Strand Engineer then took over and set it to the lighting plot. It was still not correct. Rehearsal was cancelled as it was obvious something was wrong. After several hours the fault was traced to the wiring …which at least exonerated me. The fault? When they wired up the console they did it in reverse. So every time I selected (for instance) Tab 1 which should have given me circuit 1…..the switchgear at the other end of the building actuated circuit 200. Tab 2 = 199 / Tab 3 = 198 etc etc. Only one circuit was correct i.e.: circuit 100 which was half way between the wrong and correct circuits of 200. The entire Lighting plot had to then be re-written showing the opposite numbers to the original ones. Even when the board was then up and running the dust still permeated the switch room and for the first couple of weeks the Strand Engineer spent his time in the theatre sorting out all kinds of associated problems. In the Pathe News sequence, which shows the very last time that a tram travelled down Church Street, there is a brief shot of me operating the board at 5’45”. I later moved into TV at Granada Studios in Manchester and a couple of years ago I tried to find out if the Strand Console was still there, because the only way it could have been removed would have been to have smashed a hole in the front projection room wall again. Over the years the cinema eventually was tripled and the board was still there, but there was no use for it anymore. It was then gutted and turned into a Nite Club, and I learned that the console was removed and was last known to have been stored in an understage dressing room from where it was eventually sold. It now resides, purely as an exhibit, in the foyer of a huge Production Resource venue [LS-LIVE] in West Yorkshire.

Three photos uploaded going back to the ‘heyday’ of the wonderful ABC Theatre – long before its very sad subdivision….

The first five minutes of one of the 1960’s ABC TV ‘spectaculars’:-

Appearing in the above: Peter Gordeno & Dancers, Tony Hancock, John Junkin and Bob Sharples & the ABC Television Orchestra. I believe that others appearing on the same bill included Freddie Davis and Jeannie Carson.

I understand that these TV recordings survive intact and, if so, one would have thought that the enterprising married couple who own and operate the wonderful (I think) ‘Talking Pictures’ TV channel would try and acquire them for Sunday evening screenings as a refreshing change from the third repeat of the same episodes of ‘Sunday Night at The London Palladium’. The ABC Blackpool shows were equally as good and often featured the ‘revolve’ (yes, like the London Palladium had).