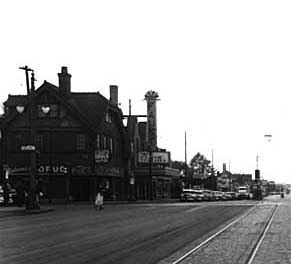 The son of the Faust Theater’s owner was wounded by a knife-wielding robber who held up the sex-oriented theater in St. Paul Monday afternoon. Peter Hafiz, 27, of Woodbury, was taken to St. Paul-Ramsey Medical Center after the 4:50 p.m. incident and was listed last night in serious condition. Hafiz’s father, Frank, owns the theater at University Av. and Dale St. The robber fled with an undetermined amount of cash, police Capt. Stephen Roscoe said.

The last day of business at St. Paul’s Faust Theatre was disrupted Monday when a pornography protest organized for TV coverage went awry and a TV photographer was injured in a fight with Faust employees after they had wrestled him out of the theater. Earlier, another photographer and several protesters had been doused with water by a Faust employee. When they went inside the building to complain, two other TV photographers followed to videotape the encounter.

For Martin O. Weddington, who has lived near the corner of Dale Street and University Avenue for decades, the Faust Theatre brings back both pleasant and disturbing memories. When he was a youngster, he enjoyed going to the movies there. Years later, Weddington joined the neighborhood residents who picketed the “notorious Faust”, a sex emporium featuring movies, live and video peep shows, exotic dancing, and sexually-oriented books and paraphernalia.

I worked for Ferris Alexander and I did work at the Faust a few times as a projectionist and Ferris never operated the Faust, it was operated by the Hafiz family.

Dave Kenney’s Twin cities Picture Show says that in the early 1930s the Faust Theatre was given a modern makeover designed by Liebenberg & Kaplan.

Last day of performances as a adult cinema did not go well.