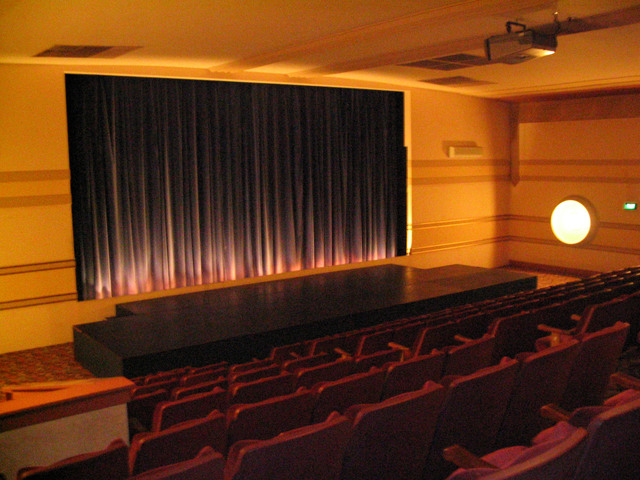 Located in the Sydney inner-city district of Glebe, the Astor Cinema opened 1st December 1937 with a total seating capacity of 992; 722 in the stalls and 270 in the circle. It was designed in a simple Art Deco style by the noted cinema architectural firm Kaberry & Chard. The name of the cinema ‘Astor’ is mounted on a stone panel at the side of the cinema entrance. The square proscenium originally had concealed lighting in its surround and there is a decorative plaster feature in the centre of the ceiling. The side-walls in the circle have circular mouldings, which contain lighting. Throughout its life, it was independently operated.

Due to the impact of television, it was closed in November 1959 and became a storage facility for theatre equipment. The Astor Cinema re-opened in 1968 as a second-run cinema. In 1970, it was re-named Filmor Red Star Cinema, screening cult films and experimental films. New owners came in 1971 and it was re-named New Arts Cinema. Alterations were made to the stage and live performances began as well as film. In 1973, a stage production of “Rock Horror Show” ran here for three years. This was followed by “Oh Calcutta” but the show was banned and for several nights, performances went ahead, and then police came and arrested the performers, much to the delight of the management who gained a great deal of publicity. On June 18th 1976 a production of the Los Angeles based, all male drag show show, “Cycle Sluts” began a successful run.

The New Arts Cinema closed in mid-1978 and re-opened in August 1978 as the Curzon Cinema, screening mainstream films, but was closed a few weeks later. It briefly returned to live performances, then in February 1979 was put up for sale.

In December 1979, the lease was purchased by Chris Kiely and it re-opened on 29th December 1979 as the Valhalla Cinema. Being close to the University of Sydney, it began a successful programme of revival and art house features, as well as occasional rock concerts. In 1987, Chris Kiely purchased the freehold on the building and in 1994, the Valhalla Cinema was twinned. The circle became Screen 2, with a drop wall inserted from the ceiling and using the original projection box, the stalls became Screen 1, using the original proscenium arch and with a new projection box built at the rear, beneath the circle. The cinema was very successful for many years, until a new 10-screen Hoyts multiplex opened and a new 4-screen art house also opened nearby.

The Valhalla Cinema was closed on 31st January 1999, with Peter Sellers in “The Smallest Show on Earth”. A new company took over the lease, but quickly went into liquidation and Chris Kiely decided to re-open the Valhalla Cinema. But despite a loyal patronage, it wasn’t enough to make running the cinema viable, and it closed on 3rd August 2005. The Cinema Theatre Association (UK) gained access to visit the closed down cinema on a visit they made to Australia in March 2006, and found everything mothballed, ready to operate again. But this was not to be, and an offer ‘too good to refuse’ was made to Chris Kiely by developers, to convert the building into office and retail space. The National Trust were consulted to have the building ‘Listed’ but it was too late. The interior was gutted back to bare brick in 2007.

When it was a single screen cinema it had a very nice mono sound system with a nice echo.then one day in the 70s somebody installed stereo it was nice but the mono was much much better.

I used to go to the Valhalla frequently in the 80’s and early 90’s. Loved the atmosphere and the crowd it attracted not to mention getting to see some old classics on the big screen. I miss that. I used to collect their bi-annual advertising movie posters featuring all their upcoming movies with session dates and times. I still have a stack of them, should get a couple framed I guess.RIP Valhalla.

Thanks for the info. I so miss the Valhalla. Kit66, would you consider selling me one of those posters? Love to frame one myself.

@kit66 – you should take some photos, or scan them in; so many people like me really wish we’d kept our posters – an being able to read back over those works of art would be sooo awesome!

“A new company took over the lease, but quickly went into liquidation and Chris Kiely decided to re-open the Valhalla Cinema.” – Sadly that was a live theatre company, which did not have the funding to make the offer on the premises, leading to the firing of the (then) General Manager, followed by the unfortunate liquidation of the theatre company itself [Names of Company and GM witheld]

In the late 80’s it ran “Saturday Afternoon Double Features” in a hark back to earlier times, complete with rolling Jaffas down the aisles. Distinctly remember seeing “Thunderbirds Are Go! Sadly another one gone…

The cinema also installed 70mm projection but the screen size remained the same as the one used for 35mm films.Such a waste of 70mm

Opened on 1/12/1937. Hopefully the rest of tne building might get heritage listed one day?