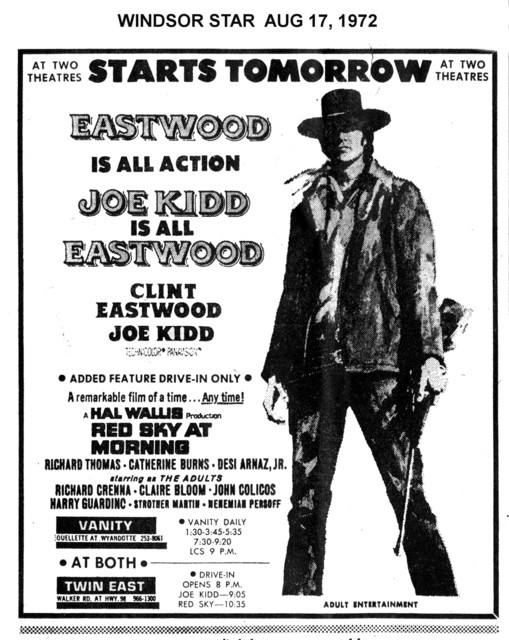 The Vanity Theatre was opened on November 21, 1936 with Edmund Lowe in “7 Sinners” & Marion Talley in “Follow Your Heart”. It was part of Twentieth Century Theatres in the early-1960’s. It became the Blind Dog Bar, which was also a live music venue. That had closed by 2015 and the theatre was demolished in April 2016.

This looks to be “The Blind Dog” Bar. New metallic facade on the front, the back of the building looks old and may have had a very small stagehouse. It is a long narrow building. The other side of the street is a large modern tower.

I loved this theatre when I lived in Windsor (69-70).
Let’s see what I can remember seeing there….

And a couple of others I’m sure. Loved that place.

This web page about the Vanity Theatre says that Famous Players closed the house in 1987. It was designed by local architect A. H. McPhail. In later years the seating capacity was reduced from the original 966 to 695 by closing the balcony. There are three photos, including one of the original Streamline Modern front. A mid-1970s remodeling removed the marquee and covered up the elegant details of the facade with an aluminum skin.

This cinema/live music venue has been closed for sometime. Its in a very sad state, for at one time in the 1970s and early 80s, every big movie release seemed to come to the Vanity. Long line ups of ticket buyers down Ouellette Avenue were a common sight at weekends when the latest blockbuster arrived at the Vanity. “The Deer Hunter"and "Apocalypse Now” were two that my older brother got into to see. I saw “Star Trek, The Motion Picture”, “Star Trek II; The Wrath of Khan”, “Indiana Jones and the Temple of Doom”, “Star Wars: Return of Jedi”, and the last Sean Connery James Bond film, “Never Say Never Again”. I believe the Vanity ended its run as a movie house in early 1987 with “Star Trek IV: The Voyage Home” which i also saw there, Many happy memories at the Vanity. 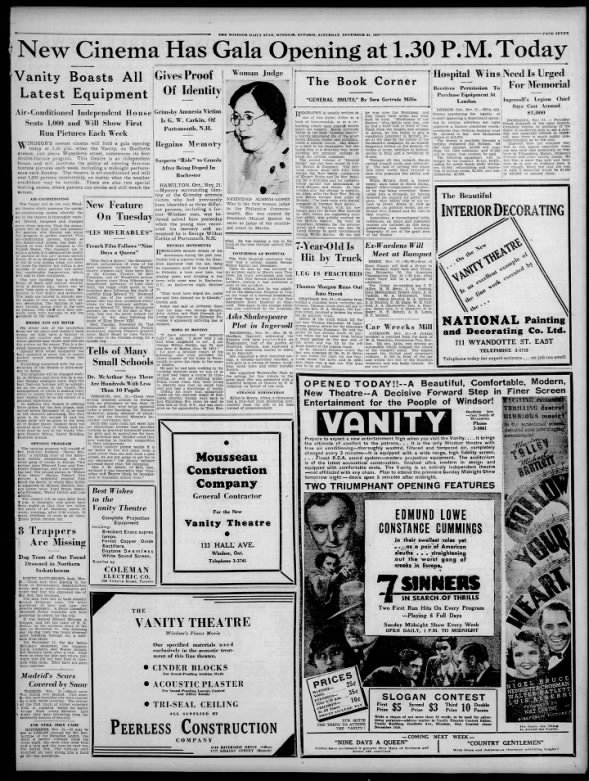 The Vanity’s status should be set to Demolished, as the theatre was torn down in April 2016 according to this article: