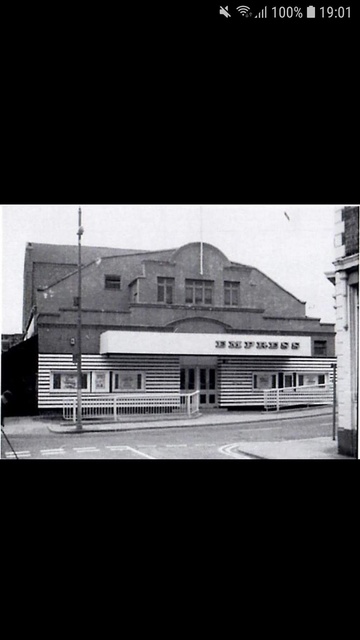 The Empress Assembly Hall was opened on 26th December 1913, and became the head office of the owners Cheshire County Cinemas. The company run by the Godfrey family had their head office at the rear of the cinema and ran a number of cinemas dotted around Cheshire and Lancashire.

The Empress Kinema had an exterior in the Chinese style. The foyer was small with a paybox on the right as you entered. Opposite was was the balcony staircase. Next to the paybox was a door leading to the small projection room. The equipment consisted of Westar projectors, Peerless lamp houses and Western Electric sound with four-track magnetic. There was also a slide lantern. The Empress Kinema originally had a seating capacity of 1,200, later reduced to 1,088. It had a fully equipped stage and stage house for variety shows, although it was primarily a cinema. A Mr John Forster was a relief projectionist for the circuit. For many years the manager was a Mr John Darlington. He was there at the time of silent films and in those days would stand behind the screen creating sound effects. Films were usually shown just in the evenings with the main feature being screened twice and the supporting film once. There was a children’s matinee on Saturday afternoons. A film showing Trooping the Colour with a soundtrack of the National Anthem was shown at the start of the performance, and for some reason the censor’s certificate was never screened when I was going to the cinema. In the early-1950’s, it was re-named Empress Theatre and with the arrival of Cinemascope, the seating capacity had been reduced to 1,023.

On the 23 June 1973 the Empress Theatre closed, its last feature was Malcolm McDowall in “A Clockwork Orange”. By this time, the seating capacity had been reduced to 923 seats. The Empress Theatre was demolished to make way for road development.

David.
You should say why you’ve changed the opening date from “about 1920” to “26 Dec 1913”.
A gap of 7 years is quite big.
It’s always best to cover yourself in case your source is wrong.
Regards from Philip.

Philip, I didn’t change the date. I see that in 1914 it is advertised as the Empress assembly hall.

Just as well I wasn’t holding my breath waiting for your reply. 8 years?

Philip I have seen an ad advertising the Empress showing ‘Hearts Adrift’ on 21 December 1914 for three days and ‘A Lady of Quality’ from the Thursday. Do you know if the Empress Assembly Hall was the cinema, or some other building, because the Assembly Hall ad is from May 1914 and films were not being shown then. If films were shown at the Empress from 1913 it seems the Assembly Hall was a different building. The 1913 date put in the write up was changed by someone else. I had put it down as around 1920, obtained from another source. Thanks for putting it right. Your comments are appreciated. Hope you can shed more light on this. It was a great little cinema I visited it often.

David. I’ve replied to this, but I can’t see it anymore. Let me know if you saw it, because I’ve since found my handwritten notes, which I could email to you, if you’d like (too much to type out). The Empress was indeed called The Empress Assembly Hall when it opened on Boxing Day, 1913, as a cinema with a flat floor which could also be used for other public functions. “Special Programme of Star Pictures. Three performances a day at 2.30, 7 & 9. The Latest in Cinema: The Singing & Talking Pictures, direct from and as produced at the Royal Opera House, Covent Garden, London. Prices: 2d, 4d & 6d.” Philip.

Philip, many thanks for the info. When it re opened after the re-fit was it then owned by Cheshire County Cinemas?

Widnes Weekly News, June 1915. Empress Cinema Hall, General Manager Bob Hamilton. Last week open before closing down on 11 June 1915 for “extensive alterations”. “The coldest hall in Winter must be the coolest hall in Summer”. Grand reopening, August Bank Holiday Week. The floor will be raked, a balcony will be added, and a large stage fitted.

I’m not clear when Cheshire County Cinemas was formed (1922 has been said), but Robert Hamilton was there at the beginning. The original owner of the Empress was Alphonso Smith who had been the Managing Director of the Runcorn Palace. He built the Empress out of spite after falling out with the other directors.

The balcony staircase was on the right, just past the cash desk.