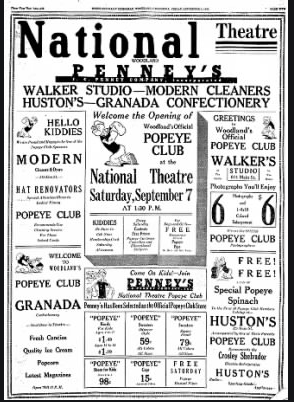 The Webster-Granada Theatre opened on March 31, 1922 with Strongheart in “The Silent Call”. It was equipped with a Robert-Morton ‘special’ organ. Initially programed for movies, live theatre and vaudeville. It became a full-time movie theatre in November 1923 and was renamed Granada Theatre. On April 4, 1924 it was renamed National Theatre. It was destroyed in a fire in the early morning hours of April 25, 1936.

This item from the May 21, 1921, issue of Building & Engineering News could have been about the house that became the National Theatre:

W. Stuart Webster officially launched his 760-seat Webster-Granada Theatre on March 31, 1922 with Strongheart in “The Silent Call” supported by a Buster Keaton short film and an Aesop’s Fable cartoon. The Robert Morton Special Orchestral organ was the biggest hit and had arrived in December of 1921 in 27 shipping crates. The theatre also featured live plays and live vaudeville on various days. George Mann and Morgan A. Walsh’s National Theatre Syndicate purchased the Granada in November of 1923 converting to full time motion pictures. They renamed it the National Theatre almost immediately thereafter.

The National was converted to sound in 1929 with Vitaphone and with Western Electric sound added on Mary 25, 1930. The National’s final showings a double feature with “Music Goes Round” and “Crime Doesn’t Pay” on April 24, 1936. In the early morning of April 25, 1936, an arson fire ended the theater’s run. Plans for a new National Theatre were drawn up within days of the fire with its name eventually changing to the State Theatre which launched in 1937.

Uploaded an ad from the Woodland Daily Democrat.