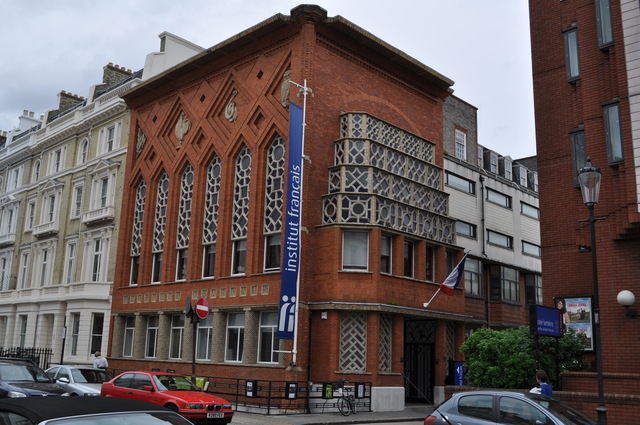 Located within the Institut Francais du Royaume-Uni in the South Kensington district of West London. The Art Deco style building was designed by French architect Patrice Bonnet, opening in 1939.

The Cine Lumiere is located on the first floor and was originally a theatre. It was retro-fitted to cinema use in 1996 to the plans of architect Jean-Francois Darin, and was opened by French film actress Catherine Deneuve.

The Cine Lumiere was temporarily closed from July 2008 until January 2009 for renovation to the plans of architect Stefanie Fisher. Seating was given as 299. All films are shown in their original language versions, with English sub-titles. In late-2019/early-2020 a second screen was opened on the lower floor. It has 30-35 seats.

I worked there occasionally as relief projectionist in the evenings in the early 90’s.
The 1960’s Westars had very slow changeover shutters :they sometimes did a “wipe” across….
once, when i did a show for the birthday of film critic Phillip Berenson and friends we showed a fellini film that started off silent… then sound came through the projection box monitor…so all was fine….after a few minutes birthday boy arrived huffing at the projection door…quite high up…saying he knew the front was silent…but there was no sound at all….I stopped the show after going into the auditorium…and found that the speaker had been disconnected and wheeled away on the theatre stage…