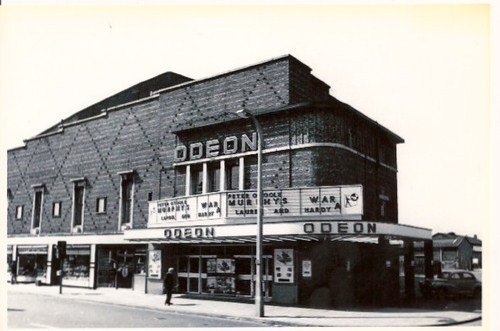 The Ritz Cinema opened on 22nd February 1937 with Jeanette MacDonald in "San Francisco". It was built for the Segelman family’s Central Pictures (Lincoln) Ltd. Seating was provided for 1,240 in the stalls and 510 in the circle (a total of 1,750 seats). There was a 20 feet deep stage and five dressing rooms. A cafe was attached, for the convenience of patrons and the general public.

In 1941, the Ritz Cinema had minor damage from German bombing. In 1942, a Compton 3Manual/8Rank organ was installed, which was originally installed in the Cameo Cinema, Charing Cross Road, London.

In February 1954, the Ritz Cinema became the first cinema in Lincoln to have CinemaScope installed and the first film to play in this process was Richard Burton in "The Robe". The Ritz Cinema was taken over by the Rank Organisation on 2nd January 1956 and was re-named Odeon on 20th August 1956.

The Odeon was closed on 17th October 1981 and the building remained closed for three years. In 1984, it was taken over by independent exhibitor, Barry Stead, who set about renovating the cinema.

It re-opened as the Ritz Cinema on 15th February 1985 with Walt Disney’s "101 Dalmations", which sold out. On 10th April 1985, it was closed for two weeks to expand the stage to allow more use for live performances. Converted into a triple screen cinema which opened on 28th March 1995 with 485 seats in the former circle and 2 screens in the former stalls, each seating 300.

The Ritz Cinema was closed on 16th March 1996. On 27th May 1998, it opened as a pub in the J.D. Wetherspoon chain named Ritz, using the foyer and stalls area, the former circle and projection areas are closed off and unused.

In the summer of 2013, it was announced the Ritz Cinema will be reopened by the end of 2013, providing a 450-seat cinema in the former circle area, screening the latest Hollywood blockbusters and classic films. However, after a period of delay, the Ritz Cinema re-opened in July 2015. The Ritx Cinema was closed at the end of August 2017.

http://www.flickr.com/photos/stagedoor/2123407434/
(that light fitting is now in the Hollywood Plaza, Scarborough)

The commercial cinema was due to reopen in the summer of 2012, Pete Genders said A cinema in Lincoln is set to reopen after standing derelict for more than a decade.

The Ritz cinema on the High Street closed in 1996 but a community group has announced plans to renovate and refurbish the venue.

Pete Genders, from Off the Bench, said it would open as both a commercial cinema and youth theatre this year.

But the voluntary organisation said a lot of work needed to be done first and has appealed for help from the public.

‘An alternative’ Mr Genders said the project was seen as a way of tackling levels of crime and antisocial behaviour in Lincoln.

He said it was intended for the cinema to be cheaper than others, giving people “an alternative in the city”.

“We thought it would be great for Lincoln to have an affordable cinema people can go to,” he said.

A JD Wetherspoons pub occupies the foyer and stalls area on the ground floor of the building but a decaying auditorium remains upstairs, the voluntary organisation said.

The seats and the screen have been removed and the projection areas closed off and in various levels of decay.

As well as initial funding from City of Lincoln Council, Off the Bench has applied for a Heritage Lottery grant and the scheme has been supported by JD Wetherspoons.

Mr Genders said: “We will be opening in stages. The youth rooms will open by the end of February and, hopefully, the screen itself will be open in the summer.

Wetherspoon News for Winter 2015/16 pictures the pub and says a special “Reel” Ale has been in Newark for them.

Under the ownership of Barrie and Brenda Stead, the last live show, The East Of England Orchestra was on Friday 6th January 1995, then the conversion to a triple cinema began. Films continued to be shown while the conversion took place. Screens 2 and 3 in the former Stalls opened Friday 7th April 1995 with the films Dumb And Dumber in Screen 2, and the re -release again of Walt Disneys 101 Dalmatians and Shallow Grave in Screen 3, ready for the Easter Holidays. Screen 1 in the former Circle then opened Friday 28th April 1995 with Legends Of The Fall. The Ritz didn’t close in 1996, but did close after the final performances of Tomorrow Never Dies, Spice World The Movie and The Borrowers on Thursday 8th January, 1998.