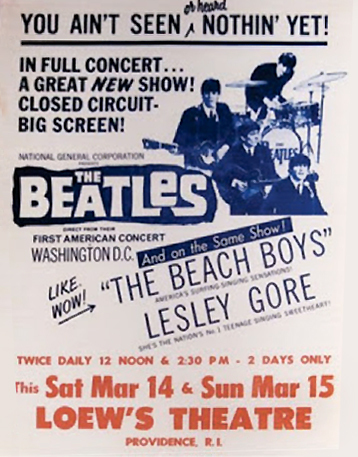 It was built on the site of Bullock’s Theatre, an early movie/vaudeville theatre from 1909 and the Gaiety Theatre which opened as a movie theatre in 1914 and was renamed Conn’s City Theatre in 1925. Loew’s State Theatre opened on October 6, 1928 with 3,232 seats (1,984 in the orchestra and 1,248 in the balcony). The opening movie was William Haines in “Excess Baggage”. The proscenium is 52ft wide and the stage 32ft deep. It was equipped with a Robert Morton pipe organ which had its 4 manual console on the left side of the orchestra pit. In 1954 the organ was badly damaged by flooding caused by Hurricane Carol, and was eventually removed from the building in 1963 having been sold to a private house in Waltham, MA. A Wurlitzer organ has now been installed.

On August 27, 1971 under new ownership it was renamed Palace Theatre presenting movies, live performances and rock concerts. It was closed in late-1975 for refurbishment, reopening on June 23, 1976 as the Ocean State Theatre presenting first run movies. In the mid-2000’s it became the Providence Performing Arts Center.

The Providence Performing Arts Center is listed on the National Register of Historic Places.

“The Sunday Journal devoted the entire front page of the amusement section to a feature story on the removal of the once-famous organs in the Strand, (Loew’s) State, and Majestic. Carrying a picture of Chester McLean, Strand house-manager, and pictures of the relics of the organs, the article stirred up many nostalgic memories for older moviegoers. A resident of nearby Hope Valley, Theo Smith, is buying up the instruments "to save them from the scrap pile.” He repairs the organs, donating them to churches. He is also assembling a complete unit for his home."

I think the photos posted by lost memory on 10/28/08 are nicer than the ones on the theatre’s wabsite. Thanks very much!

This theater showed the original print of Lon Chaney’s London After Midnight. My uncle owned the original hand painted poster which was sold in the late 80s…

I also saw King Kong 1976 on opening day here with the same Uncle as above. It was so packed we had to sit in the last row under the balcony.

Watch this amazing video between Joey and the real horses when War Horse came to Providence.

Seems that this movie theatre was simply called the “Loew’s Theatre” from 1950-1972. The Beatles' February 11, 1964 concert in Washington, DC was shown on closed circuit television here along with separate videotaped performances by the Beach Boys and Lesley Gore on March 14 & 15, 1964. In ‘71 the theatre changed ownership and in '72 it became a live music venue called the “Palace Concert Theatre”.

The Theatre Historical Society archive has the MGM Theatre Report for the State Theatre on “Weybosette” Street. It’s Card # 549. There is an exterior photo taken in 1941. The theater is in “DeLuxe” condition. It exhibits MGM product. There were 1981 orchestra seats; 991 balcony seats, and 250 seats in the loges, total: 3,232 seats. The photo shows the name as “Loew’s State”, but the Report simply calls it the “State” theater.

On B&W photo listed for 1965, it’s actually 1971 when Walt Disney’s “moneymaker” “$1,000,000 Duck” opened in theatres. Tony Roberts, star of the movie said it was a box office smash after a Broadway performance.

There is a fellow named Bob Foreman who is a long time back stage employee of the Fox Theater in Atlanta, a theater with a similar history to this one. Bob runs a website called Vintage Theater Catalogs which started out telling details of Fox backstage, restoration, business, and technical history. Lately he has expanded to similar entries about other classic theaters.

Today he has published an article on the Loew’s State Theater in Providence that tells in great detail the story of a tragedy that took place in the summer of 1928 while this theater was under construction. After the completion of the installation of the electrical equipment connecting the theater to the city grid, the power was turned on resulting in a massive explosion which destroyed the power room and killed three workers, two employees of the Narragansett Power Company and the head of construction for Loew’s. The cause of the explosion was never determined.

The article goes on to give a good overview of the ensuing history of this location richly illustrated with period photos, drawings, and maps. Anyone who is interested in the Loew’s State as well as the two hurricanes that damaged it and other downtown theaters and finally it’s rebirth as a performing arts center will find this article well worth their time.

In reading the comments to see if there was any mention of this event, I came across the name of William Trambukis, manager here in 1963. When I was managing the Loew’s 12 Oaks in Atlanta, the Regional Director headquartered in Warwick RI was none other than William J. Trambukis. It must have been an important job as the region not only extended south to Atlanta but west at least as far as St. Louis. I found “T” as he was called a gruff, unpleasant guy to work for but that’s fine, he had little use for me either. Fortunately I only actually met him twice as most of my supervision came from the Atlanta City Manager.

I see that Bob Foreman has also posted, in the photo section, an article from the local paper from 1958 that tells a good bit about the history of the theater and especially its current manager, William J. “T” Trambukis. Turns out that the history of these two was intertwined from the start. “T” started out here as an usher working his way up the ladder until being named the eleventh manager in 1954. This was a case of bad timing as the hurricane struck soon after. However it did give him a chance to shine as he supervised the repairs and got the theater up and running again.

According to earlier comments, “T” was still the

manager here in 1963, and it is possible he turned out the lights as the final manager for Loew’s when they shut it down in 1971. This whole story may explain something I always wondered about at the time, which was, why did Loew’s have a regional office in Warwick RI, a city they had no theaters in?

This theater was a big operation and there were department heads for systems, I guess HVAC, Engineering, Electricals, cleaning, floor staff, concessions, and box office in addition to assistant managers, secretary, and even a poster artist and house painter. That is more department heads than I had employees at the Loew’s theater I was trying to manage for him. No wonder he had so little use for my efforts.

As I said earlier, I did not have much contact with “T” just his twice a year inspection plus my initial job interview with him. Although the Grand and Tara theaters had in the past been managed by local hires from Atlanta, I was the first local hire he made instead of transferring an existing manager in from elsewhere in his region. The City Manager, also the manager of the Grand, was a nice boss named John Hebert who always treated me fairly and I know he felt badly when he had to pass on criticisms from “T”. He left Atlanta to be manager of the Loew’s flagship, the Times Square Loew’s State. I stopped by to see him when I was in NYC in 1984, and by then he was the City Manager of The Bronx.

Thanks for posting these articles Bob. They have brought back a lot of memories that are not nearly as unpleasant as I remember them being as I was living them.