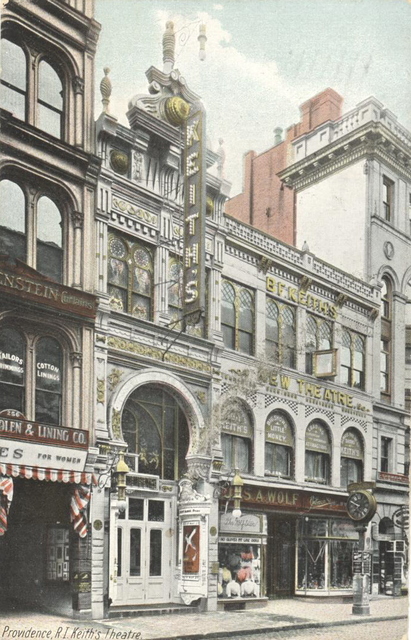 The Empire Theatre has a long history that began in 1878 as Low’s Opera House, when it was a rival to the Providence Opera House on Dorrance Street, opened seven years earlier in 1871. It was re-built, reopening on October 24, 1898 with a seating capacity of 1,801.

In the seventy-one years of its existence in the center of downtown Providence, it served as an illustrious home to theatre and vaudeville and films, under the later names of Keith’s Theatre, B.F. Keith’s New Theatre, Victory Theatre, RKO Victory Theatre, and finally, from 1936 to its demise in 1948, the Empire Theatre.

The name ‘Empire’ had been given to two other theatres on the same street over the decades, all within a few blocks of each other. The first was the Empire Theatre at Westminster Street and Empire Street. That was torn down in 1916. The second was the former Westminster Theatre that became the Empire Theatre in 1915 to about 1924. This one was the last Providence theatre with that name.

By the end of its life, the Empire Theatre had become a cut-rate theatre with frequently changing double bills of subsequent-run films and other revivals. It was closed on February 29, 1948 and was soon demolished in Spring 1948.

The complete detailed record of this theatre appears in the book that narrates the history of downtown Providence theatres: Roger Brett’s 1976 “Temples of Illusion”.

An article appeared in the Providence News, September 3, 1919, describing the renovations of this theatre which had been known as Keith’s and was now, after months of extensive work, re-christened the Victory Theatre. About seventeen years later, in 1936, it would be renamed the Empire Theatre and last twelve more years after that.
CLICK HERE FOR ARTICLE titled “Victory is Popular Movie House."
And click for RE-OPENING ADVERTISEMENT.

Further renovations were done to this popular first-run movie theatre in 1924 when it was the Victory. CLICK HERE for story from The Providence News, August 25, 1924 on page 18.

Here is a low-quality but rare interior shot of the Victory Theatre and its stage area, taken on June 3, 1924 during a “Baby Peggy” contest.
CLICK FOR PICTURE

Interesting piece reporting on Christmas parties at this theatre and two others in 1922:
CHRISTMAS PARTIES

After World War I Keith’s became the Victory Theatre until the late 1930s when it became the Empire. Here is a photo of the theatre as the Victory. VICTORY THEATRE

The Theatre Historical Society archive has the MGM Theatre Report for the Empire; it’s card # 543. Unfortunately, no one filled out the form. There is an exterior photo dated June 1950, but that date conflicts with the information above that it was demolished in the spring of 1948.

Ron, To clear up your concern in your comment, that photo is actually of the Bijou Theatre, which in its last months was renamed the Empire or “New Empire,” after the earlier Empire (Keith’s) down the street had closed a couple of years earlier. It looks like they transported the marquee up the street! This “New Empire” didn’t last more than a year. If you look at the marquee of this closed theatre, it urges patrons to patronize the Victory, further up the street, which was also at times named the Modern and Westminster Playhouse.

Thanks, Gerry! I didn’t look at the photo on Card #543 after my initial view, otherwise I would have realized that something was amiss.