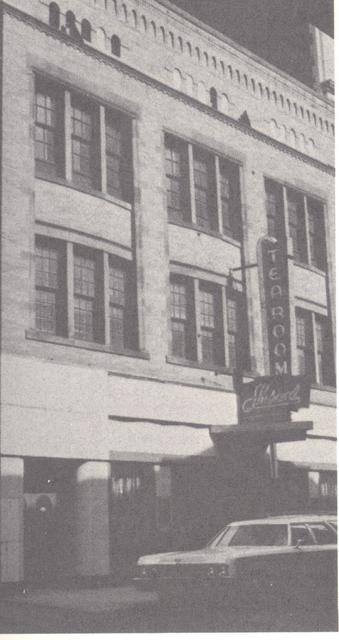 This silent-era theatre in downtown Providence was razed many decades ago.

A Providence Journal ad from June 26, 1910 boasts “Positively coolest theatre in Providence. Six-foot fan drawing fresh air from the roof and forcing it into the auditorium, first passing through a large chamber filled with ice.”

The program for that day included a variety of stage acts as well as “New and up-to-date motion pictures.” Performance continuous from 12:00 to 10:30 P.M. Admission: 10 cents.

The Casino Theatre opened in 1907.

PROVIDENCE THEATRES: “TEMPLES OF ILLUSION"
A book called "Temples of Illusion,” by Roger Brett, was published in 1976. It is Mr. Brett’s detailed history of all the old downtown area theatres of Providence from 1871 to 1950. It includes numerous rare photos, a list of theatres with name changes, and a map to show exactly where they all were. The book is an invaluable resource and is owned by many libraries in the R.I. CLAN system. I found a copy for sale online and will use it as a reference for future postings.

The Casino’s location later became the famed Shepard’s Tea Room, associated with the department store of the same name. It was where shoppers, especially women, liked to have lunch after doing a heavy bit of shopping at the downtown stores like Shepard’s, Cherry & Webb, Gladdings, The Outlet Company, and others and maybe before a movie at one of the many “temples of illusion” that dotted the city.

I remember as a child being brought here by by sister. Chicken croquettes were a very popular menu item. I never knew, until recently, that this had been a former movie theatre.

From “The Board of Trade Journal” of April, 1915:
“Too many theatres? Nothing of the sort! The Emery is turning away people at every performance. The "Hip,” with its very large auditorium, is packed to the doors. The Bijou and Nickel can’t accomodate those seeking to see “the movies,” neither can the Gaiety, the Scenic, the Union or the Casino. Out in Olneyville Spitz & Nathanson’s new theatre has all it can attend to."

According to the 1919 Providence Journal Almanac, the Casino seated 584 persons and its manager was J. E. Bolan.

The Casino Theatre was directly across the street from its grander neighbor, Scenic Temple (later named Rialto) and lived in its shadow, so to speak. It opened on May 16, 1910. Its movies were projected on a screen of plate glass one inch thick. There was a basic stage where a few vaudeville acts could perform between films. On opening night there was music by Eddy Fay’s Orchestra. The vaudeville programs could not compete with the ones across the street and by 1912 the little stage was removed and the theatre went to a grind-run movie policy. It was the first theatre in Providence to do so.

060604-dvb files- Prov Theaters 1943-1950
This Casino Theater page answers the Emery/Carlton’s location and history.-
The Casino theater (1910) became the Emery(1916) then became the Carlton and then
became stores and as of 1945 was the Shepard’s Tea Room Restaurant……….
This bldg at 126 Mathewson St was razed 1954 became parking lot……… In the postcard
pic of the 1916 Emery theater ….that is the 6 story Tilden-Thurber bldg cor of Westminster
and Mathewson Sts…….. The Scenic theater that became the Rialto was across the Mathewson St
in the next block at 69-79 Mathewson St between Washington/Fountain Sts (behind the
Dreyfus Hotel)…… I attended movies there until 1947 I eyewitnessed the bldg was razed became a parking lot.(1948)..this was the last theater and marquee on Mathewson St …..
As of 1950 Prov downtown had only seven (7) active movie/stage bldgs

Misc notes -Loews State remember “MAURICE” at the Wurlitzer That organ,lock,stock and
pipes was removed to an underground auditorium in Waltham,MA ..hope the dampness
doesn’t warp the keys……….It was available for look/listen by appointment……

Anyone interested may EMail dvb for a contact number ???? Tours were available
by bus load……….that was 20 years ago………

No, Douglas. You are wrong on this. The Emery was built as the Emery and then became the Carlton. The one that became Shepard’s Tea Room was the Casino, between Washington Street and Westminster Street. The Casino had only one name. It was across the street from the Scenic that became the Rialto. Also, you are confusing the Rialto and the Carlton. The Scenic that became the Rialto was NOT in the block between Washington and Fountain but in the block between Washington and Westminster! The last theatre and marquee on Mathewson was the Carlton, not the Rialto, though part of the Rialto’s facade still exists. The Carlton never became Shepard’s Tea Room. How could it? It became a parking lot. It was on the other side of the street and a block away! It was the Casino that became Shepard’s Tea Room. The Casino ceased operation sometime in the early 1920s at the latest. If you read Roger Brett’s Temples of Illusion, about the history of Providence theatres, it will clear this up for you. It even has a map with a guide to theatre names. This excellent book is available at the Providence Public Library. You are confusing two of the Mathewson Street blocks and the names of the former theatres on them, even though you have been to all of them, except probably the very old Casino. Finally, the Empire no longer existed in 1950, as you say. It had closed in 1948.

Here is a photo of Mathewson Street taken between 1910 and 1914 (expand the image for clearer detail). Circled on the left, behind the dentist and lunch signs, you can make out part of the vertical marquee of the Casino Theatre. As of today, this is the only known photo of the Casino Theatre! The Casino was converted to the Shepard’s Tea Room after the theatre closed sometime around or soon after 1919. Across the street, to the right, is circled the sign of the theatre called Scenic Temple, which later became known as the Rialto Theatre.

Excuse me, the correct link to the Scenic Temple (later Rialto Theatre) across the street from the Casino is this link.