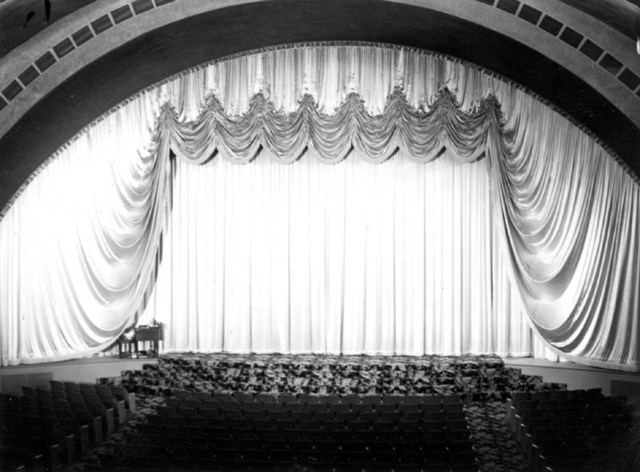 The photo Lost Memory linked to above is mis-dated. The July 9, 1949, issue of Boxoffice notes that the Porter Theatre had recently opened, and that “Colorado Territory” had been the opening feature. I notice that the marquee sign in the photo gives the scheduled date as June 29.

An item in the October 2, 1948, issue of Boxoffice Magazine gives more information. Headlined “Plans complete at Porterville,” the item said that bids were being taken for construction of the new Principal Theatres house. The building was to be 100'x160', built of concrete block, and partly faced with brick. Boxoffice said it was designed by Los Angeles architect Louis E. Wilson, but I think they must have meant Lewis Eugene Wilson, who was also the architect of the Baldwin Theatre in Los Angeles.

The photo shows that the Porter had the same unusual roof shape as the Baldwin, which also opened in 1949, on August 10th. The roof of the Baldwin was supported by laminated arches which narrowed in width and increased in height as they approached the screen end of the auditorium. The Porter appears to have the same form. It was definitely not a simple quonset hut, but a sophisticated midcentury modern design.

I’d had no idea that the Baldwin had a slightly older (though smaller and somewhat plainer) sister theater. If this place is still in decent shape, I think it’s possible that its having been designed by a significant modern architect (Wilson was a major contributor to the Baldwin Hills Village project) might be enough to qualify it for inclusion on the National Register of Historic Places.

I remember watching movies at the Porter as a child in the 1980’s. The building is currently undergoing renovations and is for lease.