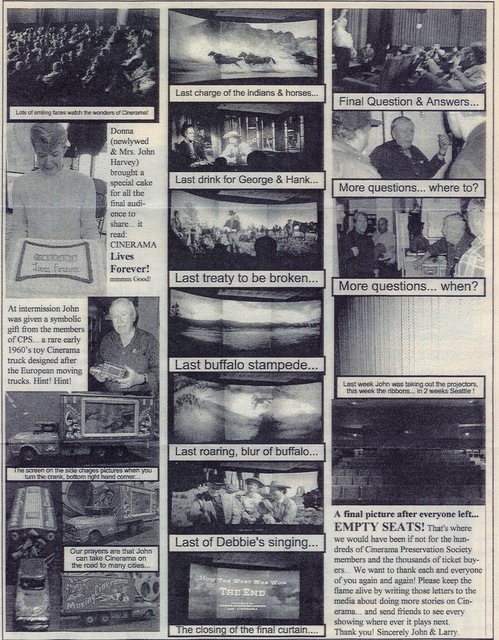 This theater is revered by thousands of Cinerama fans for being the place where, for about three wonderful years – about 1996-1999 – real, three-panel Cinerama was shown in the United States for the first time in over thirty years. More information can be found here:

I made the trip to Dayton three times during that time, tearing up when that magnificent overture preceding “How the West Was Won” began, and reliving the thrill of “This Is Cinerama” which I had not seen since that morning in 1957 when my family all went to see it at the Palace Theater in Cleveland.

I remember going to the DaBel to see Cinerama movies and also the McCook. The old Fox Kettering theater is still standing and looks to be in great shape. It would be great if some benefactor would spend the money to buy it and convert it to Cinerama so that we could have it again on this side of the world.

In 1998, and again in 1999 I made the trek to Dayton to experience Cinerama at the Neon. In 1998, the Saturday feature was This Is Cinerama, and in 1999 it was Cinerama Holiday, in glorious Eastman pink. Both times the Sunday feature was How The West Was Won. Given the friendly and informal atmosphere of the New Neon Movies, we were invited to look the place over on Friday night.

Since the Cinerama projectors must be mounted at screen level to avoid the vertical keystone effect, we were able to get an up close look at the whole operation. The side projectors were located in the back corners of the auditorium while the center projector was located in the lobby itself with the beam shooting through a hole cut in the back wall of the auditorium. The 7 track sound projector/processor was located next to the center projector. The entire presentation was run by John Harvey who alone did the work of the four to seven man crew used in the Cinerama days.

Despite the somewhat slap dash nature of the set up, there was absolutely nothing wrong with the presentation. Although the New Neon was small, with about 220 seats, from the fifth row of seats we were treated to an experience equal to that at the Seattle Cinerama and superior to the one at the Dome. Great sound, incredible picture, and a great time was had by all.

An article recently appeared in Slate magazine on the subject of Cinerama. This is the paragraph that mentioned the Neon:

Cinerama faded before I was born, but my hometown of Dayton, Ohio, became the unlikely site of a Cinerama revival in the ‘90s, thanks to the efforts of Dayton projectionist John Harvey. Harvey had previously set up a Cinerama screening room in his ranch homeâ€"eliminating two bedrooms in the processâ€"and helped the National Media Museum in Bradford, England, set up Cinerama projection in 1993. In 1996, Harvey moved his home equipment to the Neon Movies, a downtown theater that had served as a pilgrimage site for Daytonians seeking art house fare since the mid-'80s. Harvey’s Cinerama setup was supposed to have a one-month stay. Instead, it stuck around for more than three years, attracting widescreen enthusiasts like Quentin Tarantino and Joe Dante.

Keith Phipps writes about movies for The A.V. Club, the entertainment section of the Onion.

This theater was originally opened as The Dayton Movies, by the same company that owned and operated The Cincinnati Movies, now the location of the Cincinnati Shakespeare Company. They booked the same films for both locations with 5 or 6 different films showing each day, rotating the showtimes so that each film played at a different time every day. The schedules were a bit complicated but extremely interesting and full of great art-house films every month.

So…what happened to the Cinerama? I just read about it, was already planning my trip to Dayton in my head…and NO CINERAMA???

As the comments indicate, the Cinerama installation was never intended to be permanent. It was an unusual and fortuitous set of events that brought it about: the lucky coincidence of a Cinerama enthusiast and projectionist, John Harvey, living in Dayton who had, on his own, collected the equipment and films and a theater owner who was going to subdivide his single screen theater who, with John, decided to set up Cinerama just for a brief time before the construction began. As noted, what was supposed to be just a special event attracted so many people that it ran for about three years.

The setup wasn’t elegant; the Able and Charley booths were obviously temporary enclosures tucked into the corners of a very small auditorium that sat perhaps 300 people; the Baker projector was in the lobby, its beam projecting through a hole in the wall; the Cinerama sound reproducer was set up next to it. Though the screen was a genuine strip-screen with as much of a curve as the building could accommodate, it was easy to see that it was a temporary set-up, and this was probably the smallest Cinerama screen ever installed. Yet, it was all proportionally correct, and when the lights went down, the magic was all faithfully and lovingly recreated.

It could not last, though. The Neon was still operating as a regular small art theater; the Cinerama showings were held on weekends, the publicity, to the extent it existed at all, was essentially via the internet and word-of-mouth. Eventually, the crowds became smaller, and the owner needed to proceed with the twinning. I am sure that there was also concern about the equipment and the durability of the prints; these had been assembled by John Harvey from a number of prints and there was, at that time, no way of easily replacing them. The “Cinerama Holiday” print had faded to pink, and even the “This is Cinerama” print, though in otherwise good shape, had a short section with German subtitles. In addition, John was not a young man, and a proper showing of Cinerama requires a crew, not just one person. I have read that in its original showings, some theaters had a projection team of about fifteen people; they managed it at the New Neon with probably three.

But it was a wonderful three years or so, and had it not happened, I doubt if we would have had the full restorations at the Cinerama Dome and the Seattle Cinerama and the striking of new prints. I think it was an important chapter in keeping Cinerama alive, and I am sorry that this particular opportunity is not available anymore, and that the only venues that can still show authentic Cinerama in the U.S. are both on the West Coast.

Fortunately, the Cinerama Dome and the Seattle Cinerama still show authentic three panel Cinerama films occasionally (the Dome is having a major Cinerama event just about now, as I write this), though you do need to visit their sites to find out when. Usually some contributor will also give Cinema Treasures a heads up. Oh, and if you are ever in England, the Pictureville Cinema in Bradford shows “This is Cinerama” on the first Saturday of every month, and also has a widescreen festival each year, which always includes at least one three-panel Cinerama film. It is usually held in March.

There is a picture of the Neon Theater’s auditorium as it was during the period of the Cinerama revival on this webpage.

This reopened on April 29th, 1988 as Neon. Grand opening ad in the photo section.

This theater has had many 70mm engagements over the years, and they are listed in an article at the In70mm website