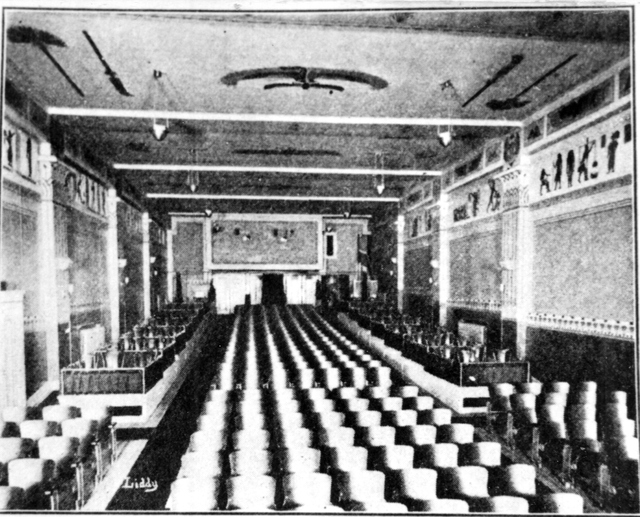 Built and operated by J.P. Montgomery as Montgomery’s Majestic Theatre, it opened March 4, 1912. The building had a magnificent Egyptian style façade, and the Egyptian theme continued inside the building. It was renamed New Rialto Theatre on October 4, 1919 when sadly all vestiges of the Egyptian style building were removed. The Rialto Theatre continued to operate until 1968, last operated as as the Rialto Adult Theatre. It was demolished in January 1969 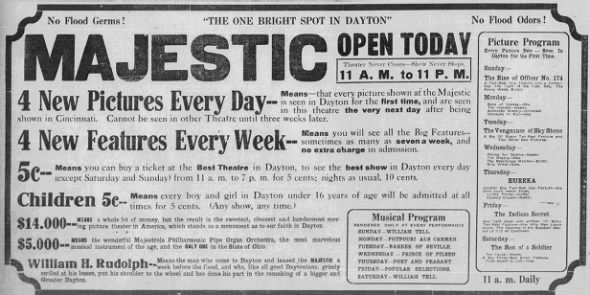 Frank T. Montgomery opened here as Montgomery’s Majestic Theater on March 4, 1912 with the Edison film, “Children Who Labor” and other selected shorts accompanied by an orchestra. Montgomery operated theatres in Georgia, South Carolina, and Florida. Montgomery left the Dayton location in 1915 with the Majestic going to William Rudolph. He departed in 1916 and new operator H.H. Bradbury took on the venue. The Majestic was next sold to two new operators who closed the venue for a refresh and name change at the end of August 1919.

Manager John Seifert of the Ideal decided to remove the Majestic’s “dated” Egyptian theme - of course, it was dated on purpose - which was “painted over” on the theater’s exterior and interior. The old Rialto at Richard and St. Paul closed. The New Rialto Theatre launched on October 4, 1919 with J. Warren Kerrigan in “A White Man’s Chance” and supported by “Dangerous Dan McGraw.” The Rialto later converted to sound to stay relevant.

The Rialto Theatre closed in February of 1955 and it looked like for the final time. It was operating as a sub-run double feature house but when the Columbia Theatre a block a way announced its closure in May of 1955 followed by demolition, the Rialto was reopened. As the city’s longest running movie theater built for film, the news was received well. The Rialto continued with a double feature grind policy all the way to October 1967.

Under a new operator, it had a brief run beginning in December of 1967 as the Rialto Adult Theatre. But the City of Dayton wasn’t thrilled with its operation and it was closed on May 26, 1968. The city closed down the Rialto as part of urban renewal; it was razed six months later.