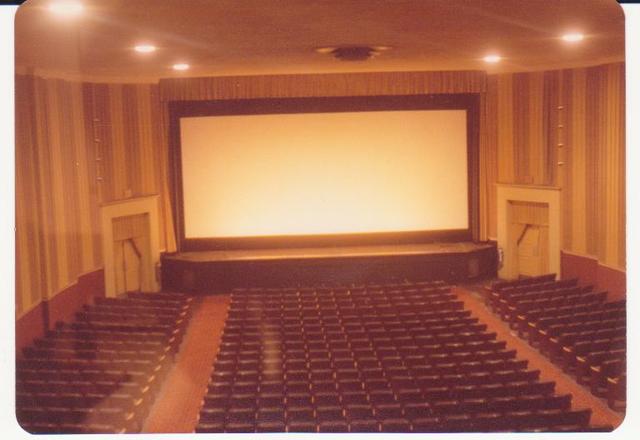 The Jefferson Theatre opened in 1949 under the banner of the Neighborhood Theatre circuit. The fact that there are two addresses recorded for this theatre (the other being 6664 Arlington Boulevard) suggests that it might at one time been accessible from the shopping plaza on Arlington Boulevard.

For a period after its closing in 1985 the building was used as a church. Since then the interior has been completely gutted and the facade removed.

The theatre was closed and then immediately renovated into a Chili’s Restaurant. The restaurant burned down some years later and I do not know the current status. I worked as a projectionist here in the early 1980s.

Not a bad looking theatre,too bad 2001 wasn’t on the marquee.

It has been a Goodwill store for about six months. I believe Chili’s had a fire, and never reopened.

I was a primary Projectionist here from 1970 until the Fall of 1972. Although I operated in a few theaters in this neighborhood including the State, I was usually at the Jefferson. Simplex XL projectors with Peerless arc lamphouses. The Simplexes were fitted with multi-channel magnetic sound heads, but the corresponding amplifiers were not present. However, the auditorium had the speakers for it.

I was part of a team of 3 one morning in 1971 when we took down the old screen and installed a new one. Somewhat tense because a matinee was scheduled to run around noon. I picked a mouse’s body out of an Altec horn before the new screen went up. Most likely the picture above showing the screen was what I helped install.

I remember that massive yellow bags of pre-popped popcorn were stored in the projection booth’s storage/generator area and were brought down as popcorn was sold.

The pictures shown are exactly as the theater was at the time I was present.

Thanks for the picture. My childhood movie theater from ca 1958 – 1964. Remember seeing first runs of “Phantom of the Opera”, “PT 109”, “Viva Las Vegas”, “The Comancheros”, “Journey to the Center of the Earth.” If I remember right, summer matinee tickets were 25c. Would love to see any other pictures of this theater from that time frame.