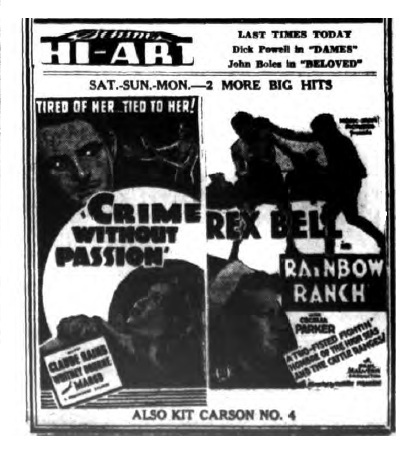 This was a Schine Circuit theater. It closed in the 1940’s, and was then used by Schine for storage. The building was destroyed in a fire on February 13, 1949.

An article published in the Medina Daily Journal in 1922 said that the Hi-Art Theatre in Lockport was located on West Avenue near the Big Bridge (now called Locks Plaza.) Another page of the newspaper has an ad for a real estate company at 13 West Avenue with the notation “Over the Hi-Art Theatre.” This block of West Avenue was later renamed West Main Street, which is confirmed by an ad for a fishing tackle shop in a 1938 issue of the newspaper, which gives its location as “16 W. Main—Opposite Hi-Art.”

Joe, I saw your comments on the Texas theaters in the greater Houston area designed by Ernest L. Shult for the Long theater chain. You cited the 1950 Theater Catalog. While I can find it on drive-ins.com, I can’t search or view, all I can do is download individual pages blindly. Can you tell me what page that list is on, or perhaps confirm for me if Shult did any theaters in Freeport, Clute, or Velasco? I’m working on a book about mid-century architecture in the area and I’m trying to find some more Shult buildings. I suspect the 1944 Velasco Theatre, now demolished, is a Shult building. Photos show that it was quite modern. Thanks!

marmer: I can’t remember which page the list of Shult’s theaters was on. I tried checking the index of the 1950-51 catalog, but Shult is not mentioned in it. I started going through the book, but my browser keeps crashing (I don’t think it likes the site’s format) so I haven’t gotten very far. I’ll keep looking, and if I find the list I’ll post here again with a link. It might take quite a while, though. The site is slow, and my computer is uncooperative.

Thanks, Joe. I did some looking too, but as I said, I can only blindly download individual pages without viewing them first (and then only with Google Chrome) and I haven’t found anything. The two new theaters in Texas that have feature pages are not by Shult. It was the 1950-51 catalog, right, not the missing 49-50 one? I did find an article in the Freeport Facts from 1941 or ‘42 which mentions the proposed new Long theaters in Velasco and Freeport, and while the Showboat in Freeport is not named yet, it mentions that it would be “built to the same plans as the Showboat in Texas City.” However, photos of the period show that the theaters were not identical, in fact the Velasco looks a little more like the Texas City Showboat than the Freeport Showboat does. However, they certainly look plausibly like Shult’s work.

By the end of WWII there were five theaters in the Freeport area: the Freeport, Port, Ora, and Showboat and the Velasco in the across-the-river town of Velasco. They were all part of the Long circuit and today only the Ora and Showboat buildings remain, as a dance club and jewelry store respectively. The Velasco ended its days as a porn house and was torn down in the 80’s, which is a shame because it was quite a nice building when new. Alden Dow’s Lake Theatre remains in Lake Jackson although it was gutted in an attempt to make it a music venue and its roof is in poor condition.

I just stumbled across some of that information myself, and posted in on the Ora Theatre page.

Joe, is it possible that the Shult listing might have been in the ‘49-50 catalog? I got the 50-51 one to work in my browser, and at the end of the book in the cumulative index it mentions an “Index of Architects” in the 49-50 book. Of course that’s not in the drive-ins.com web site for some reason. Do you have the 49-50 book? It might be around page 115 or so. It’s hard to read.

I don’t have any theater catalogs myself, and as far as I know the few editions at drive-ins.com are the only ones available on the Internet. They are fairly rare books, and the 1949-50 edition is probably the one most in demand. I’ve seen copies advertised for sale but they are out of my price range. Google Books has a scan of it but displays only snippet views, as it is apparently still under copyright.

It’s been so long that I don’t remember for sure, but I probably did get the information about Shult from Google snippets, and it probably was the 8th (1949-50) edition of the catalog. See my recent comment on the Freeport Showboat Theatre page for more information.

I have a copy of the Theatre Catalog 1949-1950 edition. There is an index to theatre designers in that edition. Ernest L. Shult is listed in the Texas section (page 162), and names 16 of his theatres. I will go through these on Cinema Treasures and add his name as architect to those theatres we don’t already have him listed for designing.