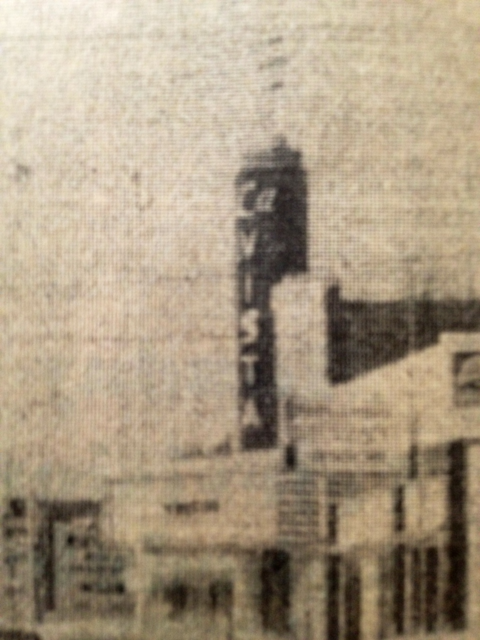 In 1926 the Griffith Brothers Amusement Company of Oklahoma City owned several theaters in the Texas Panhandle, and they decidesd to open one in Pampa in Gray County. The â€œPampa Newsâ€ for 3 December 1926 says that the Rex Theater will soon be opened at 318 West Foster Avenue. The article says that the theater will have 800 special air-cushion upholstered seats, and that the music will be furnished by a Seeburg Celesta pipe organ. The first movie shown in the new theater was â€œTake It From Meâ€, with Reginald Denny.

A few events from the history of the theater are shown in articles from the â€œPampa Newsâ€. The issue of 28 November 1928 says that the girls of Pampa High School will sell books of tickets to help raise the money needed by the Griffith Company to install Vitaphone and Movietone sound equipment in the Rex. The article says that the work will start by the end of 1928, and will require three months. The balcony of the theater will be remodeled and enlarged, and the acoustics of the building will be improved. An article dated 3 February 1930 says that sound has been installed in the Rex, the first Pampa theater to get sound.

In August 1932 theaters owned by the Griffth Company in Borger, Texas and in Lubbock, Texas were damaged by bombs. The â€œPampa Newsâ€ for 15 August 1932 says that a dynamite bomb was found above the projection room in the Rex Theater in Pampa. It did not go off because the timing mechanism malfunctioned. It was never discovered who set the bomb.

The â€œPampa Newsâ€ for 16 April 1935 says that the Rex has been remodeled, along with the LaNora and the State Theaters. The Rex got a new black and silver marquee, new lights, an enlarged foyer with a cooled water fountain, a new stage curtain, and enlarged exits. Also, 214 of the seats were recovered. The issue of 16 August 1936 says that color movies have come to the Rex, with the showing of the color film â€œThe Trail of the Lonesome Pineâ€.

I have little more information about the Rex. During the Depression years the Rex, like other Pampa theaters, no doubt cooperated with drives to raise money or to gather toys at Christmas for kids from low-income families. For example, the “Pampa News” of 12 September 1937 says that a school supply matinee will be held at the Rex Theater. Admission will be free to children bringing school supplies for those needy pupils who cannot afford them. Articles during the war years mention that the Rex, like other Pampa theaters, cooperated with rubber, scrap metal, and bond drives. Typically, admission to a matinee would be by presenting certain amounts of scrap metal or rubber, or by buying a war bond.

I have no more information about this theater. The last ad in the â€œPampa Newsâ€ that mentions the Rex is dated in November 1949. On 1 January 1950 there is an ad for the La Vista Theater, located at the same address as the Rex. At this time I am not certain whether the Rex was heavily renovated and given a new name, or whether the Rex was entirely torn down and a new theater was built at the same address. The answer is in the microfilmed editions of the “Pampa News” when I have the time to do more research.

address as Rex. I am assuming but am not certain that the LaVista was also owned by the Griffith Company.

Visited the LaVista this last weekend of October 2011 or what is left of it. The front doors are chained shut but looking through the windows of the front door, one sees a big mess. You can see pigeons flying around inside and light coming throught the roof. The seats appear to have been removed and the screen is gone. The remains of two carbon arc projectors are sitting in the foyer.

The LaVista operated well into the 1970’s.

I uploaded a picture of the Rex Theater from the 1920’s. I believe it was remodeled and renamed the La Vista.