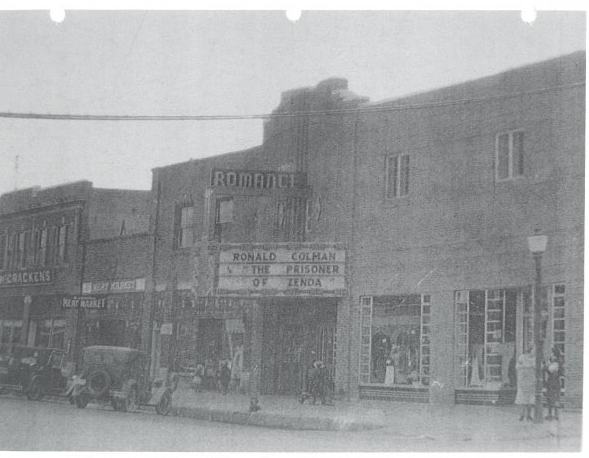 Opened in 1917 as the Rex Theater and through the years had various owners and operators.

In 1976, when it was called the Romance Theater, it was damaged by the Teton Dam flood. The theater, after being rebuilt, was renamed the Westwood Theater and finally sold to Carmike Cinemas in 1988.

Carmike Cinemas, which has another three-screen theater in this town of 14,300, operated it until closing it on March 29, 2001. In around 2006, it was reopened as a community arts center, and in 2011 was renamed Romance Theatre again.

Although it is not on the National Register of Historic places, it is near the Madison County Courthouse which is on the Register.

In the late sixties, the owners were Paul de Mordaunt and Hugh Drennen. They also owned the Rex in Rexburg at that time.

OK, so the two were listed separately in the 1967 IMPA, but here they are alternate names for the same theater. I don’t know who’s confused.

The IMPA shows two separate theaters, the Rex and the Romance. We have the Romance listed, with an aka of the Rex. There is no separate listing for the Rex. Ergo the Rex is listed improperly as an aka, or the two theaters were both called the Rex at different times.

Given the name of the town, I think the answer is there were two different theaters.

No, I added two already today. Go ahead and add it if you want to.

The Rex/Romance theatre was built and originally owned by my paternal grandfather, Mark C. Madison. According to a Rexburg newspaper article by Holly Speer dated Mar.30,2001, It opened as the Rex Theatre and played it’s first show on Feb. 22,1917. It’s name was changed to the Columbia for a short time, then back to the Rex. It was remodled in 1935, and was given it’s new name of the Romance. Prior to 1917, there were two other theatres in Rexburg; the Star and the Electric. Both of these were run by my Grandfather Madison. Since this theatre is of sentimental and family history interest to me, I would welcome any information or articles about it. I am confused about how this site works – a general search stated that there were thousands of items on this particular theatre, yet gave me nothing but a list of other article in no way connected to it. I tried an advanced search, which said “nothing found”! I also cannot find the articles talked about in this post. Clue me in!

Some of the confusion about the rex/romance may be because there is a newer theater (475 N 2nd E) that is now called The Rex. It was built around 2005 (don’t quote me on the year) and was first operated by American Family Entertainment Centers (AFEC). After a few years of struggling, AFEC left and the property owner hired out management of it and the name was shortly after changed to “The Rex”.

This has been renamed the Romance Theatre.

This undated photo shows the house as the Columbia Theatre. All the cars parked along the street appear to be from the 1910s or early 1920s.

The July 20, 1918, issue of Exhibitors Herald mentions the Rex Theatre in Rexburg, and the September 7, 1918, issue of the same publication mentions the Columbia Theatre, so the name change took place between those dates. I’ve found no later references to the Columbia, but the next reference to the Rex I’ve found is from 1925, so the name had been changed back by then.

The 1935 FDY still lists the Rex Theatre, but the 1936 FDY lists the Romance Theatre.