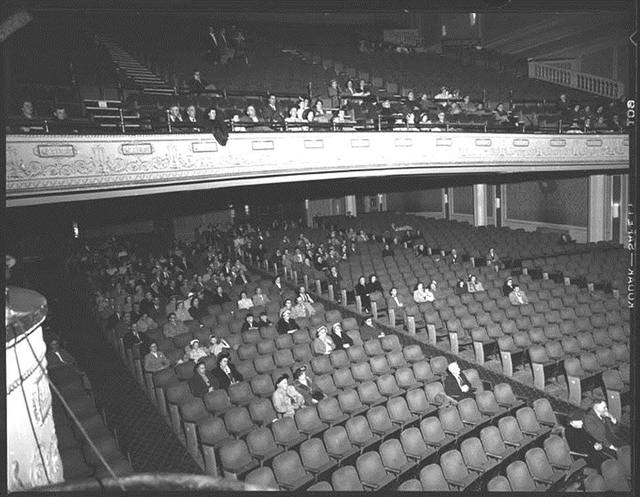 The Capitol Theatre was located at 230 Queen Street at the corner of Bank Street. Opened on November 8, 1920 with D.W. Griffith’s “The Love Flower”, a minature musical comedy “Cheer Up” and four acts of vaudeville. The 2,580-seat Capitol Theatre was owned by Famous Players and was the largest movie theatre ever built in Ottawa. It was equipped with a Warren 4 manual 17ranks theatre pipe organ.

The Capitol Theatre closed in 1970 with a screening of “M.A.S.H.” The following day, a fundraiser for Canadian Save the Children Fund was the last event to be held in the theatre when Mary Pickford in “Pollyanna” was screened.

I am Hector Ladouceur’s grand daughter. I am also looking for information and photoes of Hector and the Caitol Theatre.

Yes, I believe that this is a photo of the old capitol Theatre in Ottawa. I have a piece of it… I bought one of the 8' decorative mirrors from its lobby whemn it was demolished in 1970.

The streetcars are also gone. Shortly after this picture was taken the local government took the streetcars out of service and tore up all the tracks because they thought that the overhear wires were “unsightly”. Now (2009) they want to build a $1.2 billion (!!)light rail system in Ottawa. Great planning!!

Hi, I am Karen Brady (my married name) my single name was Brown and my uncle was the last manager of the Capital theater in Ottawa. His name was Edward Albert Brown. A magnificent theater!

Hi Karen I worked at Capitol Square Cinemas for your uncle Bert Brown. He was the best and most professional Manager I ever knew and he told me lots about the original Capitol Theatre and we became great friends. Mr.Brown told me they had a pay phone back stage so the artists like Tammy Wynette could call him with no hassle in a pre-cell phone world!!!

Bert Brown installed a pay phone backstage so the artists could call HOME!!!

Hi DavidDymond! I’m a journalism student interested in writing a story about the Capitol Cinema. I would love to hear about your experience working there. Reply to this comment if you’re interested. Thanks!

1954 photo of the Capitol Theatre projection booth added. Courtesy of the Lost Ottawa Facebook page, via the City of Ottawa Archives, CA003459.

Several interior photos added too. All via the Lost Ottawa Facebook page.

All that Glitters: A Memorial to Ottawa’s Capitol Theatre and its Predecessors

Including construction photos, plans, historical background on the development of the “Movie Palace” and on the design practices of architects, particularly Thomas W. Lamb.

Construction photos and plans in this section.