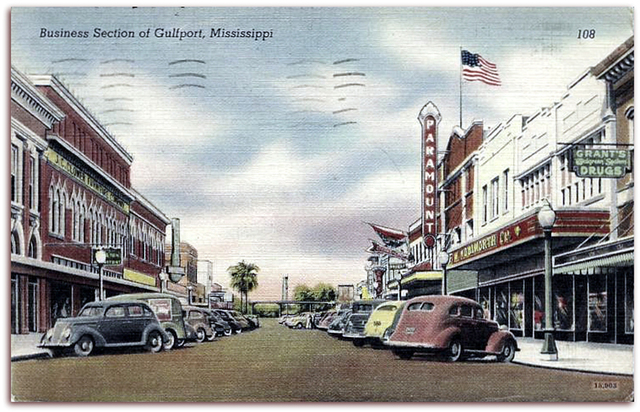 The Strand Theatre was opened on Monday November 1, 1920 at 2pm with its first matinee and had its formal opening at 8pm with the mayors from all Gulf Coast cities and guests from New Orleans attending. The Strand Orchestra played for the standing room only crowd. Admission on opening day was 33 cents for the matinee and 50 cents for the evening show. Built by Edgar N. Hirsch who also owned the Dixie Theatre in Gulfport, the building was designed by the local architect firm of Shaw and Woleben. The theatre, according to news articles had the latest in screens, and a first for the south, a concave Clifograph screen.

The opening feature for the new theatre was “Yes and No” with Norma Talmadge and a comedy with Buster Keaton. The theatre’s 1,500 or more seats were filled before 8PM and with late comers standing in the back of the house. The theatre’s pipe organ did not arrive in time to be installed for the opening of the Strand and was later installed and used for the first time on New Year’s Day of 1921. The Strand Theatre played the latest and best of the movies of that era and its stage hosted many acts, including John Philip Sousa and his band.

The Strand Theatre was acquired by the Saenger Amusement Company of New Orleans on February 20, 1922. It was closed in October 1930 to be remodeled, and reopened on December 20, 1930 as the Paramount Theatre with Charles Rogers in “Along Came Youth”. The theatre had been operated by Saenger, Paramount-Publix, Paramount-Richards, Paramount-Gulf and ABC Midsouth Theatres.

In the early-1960’s the theatre was completely remodeled. Its concessions were moved from a small cramped space on the north side to the middle of the lobby and greatly enlarged. The recessed exit doors were moved below the steps to street level in the new all glass front. The box office was moved inside the entrance and token turn stiles installed across from the box office. The seating was respaced to give greater leg room so that you could pass in front of seats without someone having to get up for you to pass. This reduced the seating to 700 on the main floor. The balcony was kept intact but never used. Stairs on each side of the lobby led to the second floor which contained huge restrooms and the theatres office and storage. Additional stairs on the west and south sides of the second floor led to the balcony seating. Its booth contained the original projectors that had been converted for sound and were well maintained by its two projectionist.

ABC Midsouth operated the theatre until about 1970 when it was closed after they opened the new Hardy Court Twin Cinema. Within weeks, it was sold to a local operator who sold it several years later to its last owner. The last movie to play at the Paramount Theatre was 1979’s James Bond feature “Moonraker”. Hurricane Frederic that year damaged the building and it was never reopened. It sat for years and when the city started proceedings to have it demolished, a group was formed to try and save the old theatre, but were not successful. It was demolished in the 1990’s and a parking lot now occupies the site of the Paramount Theatre.

We lost a grand old theatre, the oldest on the Mississippi Gulf Coast.

Thanks for the story Coastal.

CoastalCruise, I know that you join me in saying, the Paramount was an elegant old theatre. I have many fond memories of it. A friend of mine, Robert Gates was projectionest there in its last years of operation. Wish it could have been saved, its loss was really a shame and should have not happened! Was Joseph Fulton still manager when you worked there?
I remember the stairs on the north and south sides of the lobby leading to the second floor, were at least twelve feet in width, heavly carpeted, creating a grand sweeping appearance, leading to the second floor and its ofice and restrooms.
The auditorium walls, before they were painted that awful blue color during the 1960’s remodeling, were painted to look like vines and leaves were covering the walls. The amber lighting under the balcony and on the walls made it look like a light brown and green covering of vines from the seating areas. Four sets of double doors led from the lobby into the auditorum, two in the middle section and one double set on the north and south side opening into the oval auditoruim with its four sections of uppostered seats and a hugh scope screen with a gold travel curtain with motorized masking that was adjustable from the booth for both width and height. Some of the old dressing rooms remained back stage with a circular iron stair well leading up to them.
In thinking back, I do recall, only one time that the balcony was opened and that was for the John Wayne picture “Rio Bravo” and its over flow crowd.
When the wrecking crew came into the Paramount to start their work, someone had written on the south wall just down from the concession, “We love this old theatre!” Within a week or so,the Paramount was history!
The advertising motto of the Paramount was “Host to the Coast”, and it certainly lived up to that motto!

Sorry, that should have been four sections of upholstered seats.

Excellent memory wsaucier! Your description brought back memories I thought were long gone…and brought tears to my eyes. I vaguely remember going to Woolworths for a banana split. I wish my memory was better but thanks to having to take propranolol for so many years, I’m losing more and more of them. Keep posting your memories, please!! What high school did you go to and what years? I went to GEHS 66-68, then moved to CA for my senior year and graduated there 1969.

The Paramount can be partially seen in this 1930’s-era postcard view of Gulfport’s business core.

If I am not very mistaken, the Paramount burned – not demolished. Attempts were, indeed, being made to raise money to restore it when it burned. Jim Dalrymple, Waveland MS

Jim, it was not the Paramount that burned. The Sand Theatre (formerly Legion Theatre) on 13th owned by the American Legion and Ed Ortte of Bay St. Louis burned in 1973. Woolworth’s next to the Paramount burned, not the Paramount. The Paramount which had smoke damage from the Woolworth fire was demolished in the 1990’s after a group was formed to try and save it was unsuccessful in raising the money to buy and restore it. The city of Gulfport was offered the theatre for $150,000 by its owner but the city did not want to buy it, so it was demolished. Several years before the Woolworth fire the old Palace Restaurant on the other side of the Paramount partly burned and the Paramount received smoke damage from that fire too.

A few more facts about the Strand Theatre in Gulfport.

The Strand Theatre closed in Mid October 1930 for extensive remodeling which included new wall boarding for better acoustics,new deluxe seats,new heating and cooling facilities, all new projection equipment and a decrease in the size and lowering of its stage to add more seating as well as a new entrance and doors. The Robert Morton Pipe Organ with its pipes that had been in use at the theatre since it opened were removed and donated by Publix Theatres/Strand Theatre to the First Baptist Church of Gulfport in March 1930.

Three days after the Strand closed all the projection equipment and other equipment was moved to it’s sister theatre, the Anderson Theatre, which itself had just undergone extensive remodeling.

The all new theatre opened again with great fanfare on Saturday December 20, 1930 as the all new Paramount Theatre.

The opening program for the Paramount on December 20,1930 was the feature “Along Came Youth” with Charles Rogers, Stu Erwin and Francis Dee along with three featurettes. Admission for the opening program which started at 12 noon was adults 50 cents until 5 pm, 55 cents after 5 pm and children 10 cents. No actual changes were made to the Paramount after it opened in 1930 until the mid 1960’s when it was again remodeled.

The 1930 advertisement for the opening if the new Paramount used the slogan “Host to the Coast” and it lived up to that motto until its final demise. I loved that old theatre! 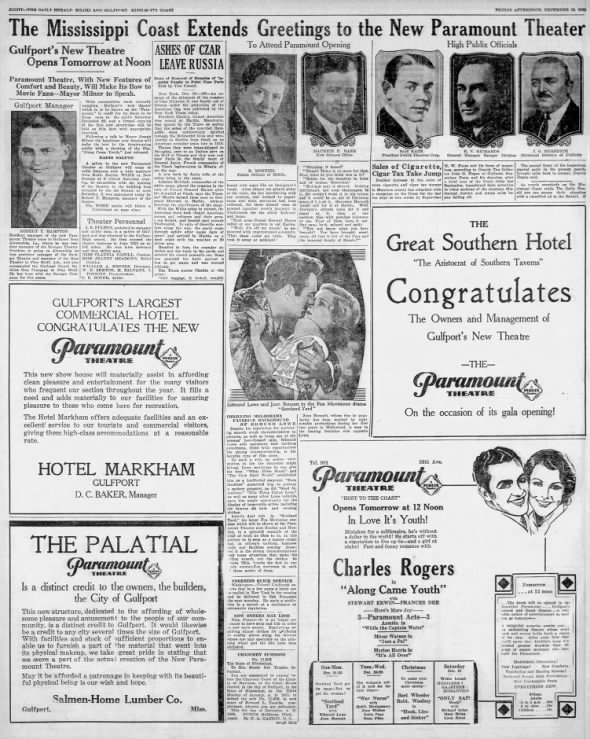