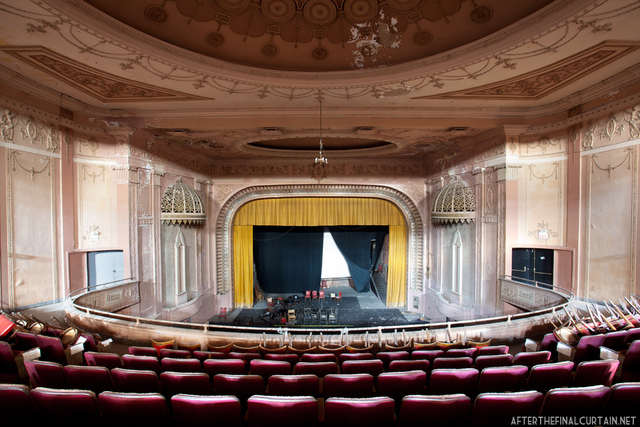 Designed with an Italian Renaissance exterior and Neo-Classical style interior, the Madison Theatre originally hosted both vaudeville acts and silent films, but switched to sound by the late 1920’s.

Robinson featured annual Christmas shows at the Madison for which children were admitted free of charge. After he died, the practice continued into the 50s.

The auditorium features a high domed ceiling with classical-inspired plasterwork decorating both the ceiling and side walls. The ceiling of the theater’s lobby is also domed, and its facade features extensive terra-cotta work, with a triple-arched window over the marquee.

In 1980, the Madison Theatre was named to the National Register of Historic Places. The last major movie palace built in Peoria, the stunningly restored Madison Theatre continued to draw crowds as a venue for rock concerts and other live acts untuil it closed in 2003. New owners have said they may restore the building, but by 2010, nothing has happened.

i will add ..we actually only pulled the alley doors open they were not locked at either theater…the only time us poor kids ever snuck in free at the rialto we got caught in 5 minutes…we didnt do any damage to either theater as well…i signed the 1980 petition to save the palace..but to no avail..shame.. there are so many empty lots downtown that the towrs could of been built on instead. just here cause im trying to find a pic of the rialto with star wars on the marquee

I’m surprised that neither theatre was kept secure. Looking forward to seeing photos of the Rialto as I never visited it. I agree with you about “Star Trek 1”; it was not a good film (“Star Trek II: Wrath of Khan” was much better).

Speaking on artisans who could properly restore the Madison to opening day (1921) condition: as of 2013 two firms with histories predating the golden age of movie palace’s still exsist today. 1. Conrad Schmitt of New Berlin, WI was founded in 1889 and has been an industry leader as first, a decorating company during the architectural boom of the late nineteenth and early twentieth century’s and second, as a leader in the restoration of many of those same properties decades later. Conrad Schmitt also has the most theater/auditorium retorations under their belt, numbering in the hundreds. Their history and portfolio can be found at conradschmitt.com. 2. Rambusch Studios, of New York, NY was founded in 1898 and has a long and venerable project/client list mirroring that of Conrad Schmitt. They can be found at rambusch.com.
Evergreene Architectural Arts also of New York, NY was founded in 1978 and quickly became a leader in the revitalizing of historic art and architecture. Evergreene is the first choice among several prominent historic preservationist architectural firms. They can be found at evergreene.com.

I saw the house of wax in 3d back in 1953. Just bought it for tv but can’t get buttercup

Elegant and lovely vintage theatre. Color choice was wonderful. Hope it is restored again and in use again too.

Regarding photo posted by Mark 8/19/13, Per the Local History Collection : Peoria Public Library.

The Warner Brothers 1936 movie “Earthworm Tractors” had a worldwide premiere at the Madison Theater in downtown Peoria, Illinois on July 24th 1936. The movie was based upon the Caterpillar Track Type Tractor and Caterpillar employees who built and sold the tractors.