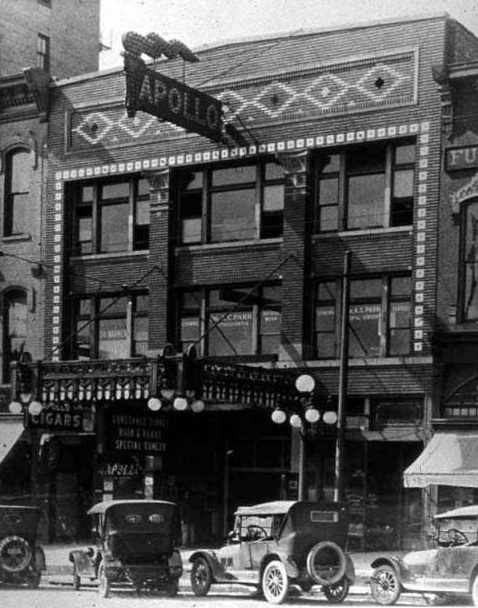 The Apollo opened in 1914 on the site of the Crescent Theater, which burned down a couple years earlier, not very long after it opened. The Apollo, like the Madison Theatre, was designed by noted Joliet architect Frederic J. Klein, who is best known for the spectacular Coronado Theatre in Rockford, Illinois.

The Apollo, inside the larger Lawyers Building, could accomodate over 800 in its auditorium, and was decorated in Art Nouveau style, including plaster cornucopias on its sidewalls. The Apollo orginally had a pipe organ and canaries were kept in its lobby!

Closed in 1958, the Apollo was briefly used for office space, and in 1960, a portion of the rear of the building was torn down when an adjacent parking lot was enlarged.

In 1988, by then practically in ruins, the Apollo was purchased and lovingly restored to its original appearance.

Since 2001, it has housed the Apollo International Film Group, which screens foreign, classic and independent movies in an early 20th century setting.

According to the book “The CORONADO THEATRE, Rockford’s Crown Jewel” the APOLLO is only one among a group designed by Peoria architect Frederic J. Klein. Others in Peoria by him are/were: HIPPODROME, DUCHESS, COLUMBIA, and the MADISON. He is also credited with the PRINCESS in Ottawa, Ill, not to mention the fabulous CORONADO in Rockford, for which alone his name should go down in history.

The present theater space, as I understand it, is the old balcony space and part of the auditorium, the ground floor and stage having been destroyed, and now seats 160.

The current incarnation is indeed a small venue utilizing the old balcony space. No original exterior facade features exist and the interior space is a totally contemporary design.

Here’s a nice shot of the Apollo:

(This is not an attack) According to Jim Rankin’s post in Sept. of 04, The Apollo Theater is the only other theater attributed to architect Frederick Klein but that would not be true. The Peoria’s Madison Theater, currently awaiting restoration, was also designed by Klein in 1921 and is an almost exact duplicate of the 1916 Circle Theater in Indianapolis, IN.