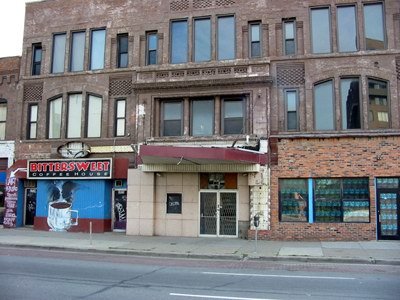 The Garden Theatre, one of C. Howard Crane’s earliest neighborhood theatres in Detroit, opened December 29, 1912, and could seat a little over 900. It was one of the largest theatres built outside downtown at the time.

Its auditorium featured, as the name implies, garden-style decoration, giving patrons the feeling of being outside amidst fake vines and birds.

It originally hosted both live stage shows and motion pictures, though later the live performances were dropped.

The Garden Theatre was closed in 1949, but in the 1950’s, was used as a nightclub. In the 1960’s, as the so-called Cass Corridor, along Woodward Avenue, where the theatre was located, declined, so did the Garden Theatre.

By then, it had reopened as an adults-only theatre, called the Peek-A-Rama. On December 12, 1974 it was renamed the Sassy Cat Adult Theatre. Its neighbors included a strip club and a pornographic book store.

The Sassy Cat Adult Theatre is now closed, and the Cass Corridor is in the midst of a massive gentrification, with coffee houses, bookstores and luxury apartment buildings displacing the more sleazier businesses of the 1970’s, 1980’s and early-1990’s.

There is now a chance that the Sassy Cat Adult Theatre, with its Beaux-Arts facade still relatively intact, could be included in the wave of renewal that has swept up the neighborhood. Restoration began in 2012, and the Garden Theatre reopened in October 2013 as a 1,200 capacity (including standing room) mixed use venue.

The Detroit News stated today that the Garden and the rest of the block it is on is due to be renovated. The Garden will be a theater again.

A complete remodeling has been done, including curtains and stage equipment, screen, carpet, projection equipment and seats, new marquee and new front.

Plans have been announced to give this theater a major renovation and be used as a mixed-use facility.