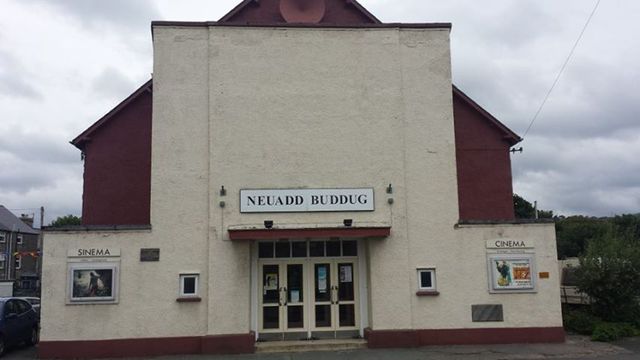 Originally the Victoria Hall, which dates from the 1890’s. By the 1930’s it had become the Victoria Cinema with seating for 350. The proscenium was 15 feet wide.

Sometime in the 1950’s the cinema came under the control of Guy Baker’s Paramount Pictures cicuit. After his death in 1983 the Victoria Cinema was closed, as did all Guy Baker’s cinemas It re-opened when Bala Council purchased it to stop its permanent closure.

Its name was changed to Sinema Neuadd Buddug (Cinema Hall Building). Now owned by Gwynnedd District Council, it presented first run films and live stage performances before ceasing to show films on 1st April 2015, when the supply of 35mm films ran out.

In 2016 the building was saved from permanent closure following a year-long campaign by volunteer action group Ffrindiau Neuadd Buddug (Friends of Buddug Hall), after it raised £20,000 from community donations and secured a £60,000 investment from the Arts Council of Wales for a new (digital) projector and sound system. The group also fundraised (without assistance from the council) a further £7,500 for a disabled toilet and ramp and £6,000 for a broken boiler.

However the cinema ran at a loss and fell into a state of disrepair. Gwynedd council, saying it did not have the resources to make the “sigificant investment” required to keep the building open, decided to move the cinema equiment to the school hall of the new £10million Ysgol y Berwyn learning campus in early-2019. The cinema duly closed at the end of December 2018, when three part-time and two casual workers were made redundant.

The Friends argued that Neuadd Buddug could have remained open for film shows had it been managed carefully by the council, and that the new location will make the cinema less popular, not least because shows will have to fit in with the many other activities at a school hall.

However, a Gwynedd council spokesman(indicating that the new hall is something more than a mere ‘school hall’) countered that: “We realise that Neuadd Buddug has been an important location for people in Bala for many years, but we firmly believe that this new purpose-built theatre and cinema facility will offer a modern arts provision where local people come together to socialise and enjoy various events. The arts space within the learning campus includes a hall for concerts and performances which can seat more than 300 people. The space will provide modern and comfortable facilities which can also be adapted to show films for up to 120 people.

Meanwhile the former Neuadd Buddug will be put on the open market.

Here is a photograph of the Neuadd Buddug Cinema:
http://www.balagwynedd.com/cinema.html

Sometime in the 1950’s the cinema came under the contol of Guy Bakers Paramount Pictures Circuit. After his death in 1983 the Victoria, as it was still known at the time, closed, as did all Guy Bakers cinemas. It re-opened when Bala Council purchased it to stop its permanent closure.

Unfortunately its future is again in doubt as Gwynedd Council announced in May this year that they were putting the cinema up for sale to curtail their costs on the building and to raise much needed funds. What will happen? One hope is that the people of Bala club together to save their cinema, much like the people of Porthmadog did in 1983. Unless someone reading this wants to buy a cinema, That is.

There are very few public amenities in Bala – Iâ€\m definitely in favour of keeping the cinema. I was recently (Nov 09) told by Gwynedd Council that Bala councilors made no attempt to stop the â€˜disposal orderâ€\ on the cinema – what are they thinking? I would be interested to discuss this further – if Mr A Turner would like to get in touch.

Have tried to e mail harhin several times but have not got a reply. Perhaps he would e mail me?

The projection equipment at Neuadd Buddug consists of two Cinemeccanica Victoria 8 projectors,with a Westrex mono amplifier.The stairs up to the projection rooms are a bit of a nightmare when carrying films,it’s a spiral staircase in a confined area.

Screen illumination is very good considering the age of the screen,which for one thing has been subjected to years of cigarette smoke.

The cinema is only open 3 nights a week,(Wed Fri & Sat)hope the council sees sense.

Installing surround sound would be a start,must be loads of dolby analogue stuff going quite cheap with so many cinemas having installed digital sound.

I’ve uploaded 8 photos from 2007, but in doing so the Google picture which was there has disappeared, shame really as it shows how nice the exterior looks now compared to my pictures. Is it possible to restore it?.