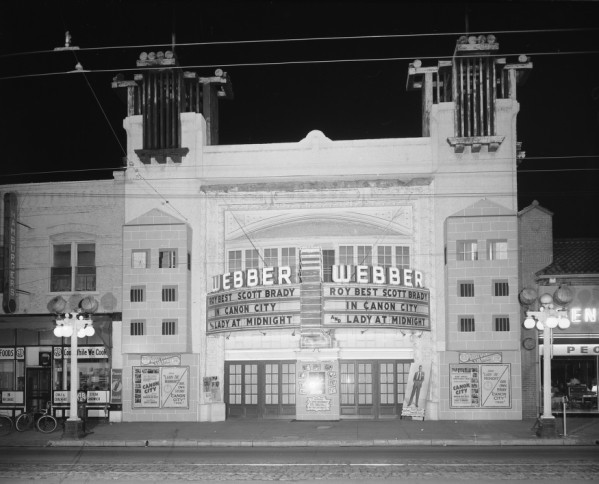 The Webber Theater opened in 1917 with 1,000 seats. In 1985 the building became Kitty’s South Theater, an adult theater/video store.

The Webber Theatre was built in 1917, according to the obituary of its builder and long-time operator, DeWitt C. Webber, published in the October 21, 1944 issue of Boxoffice Magazine. Webber had operated his eponymous theater until his retirement in 1935, after which he leased the house to Fox Intermountain. Earlier, he had opened the Majestic Theatre in Colorado Springs in 1907, and operated the Iris Theatre in Denver from 1908 until 1917. He lived in an apartment over the Webber Theatre until his death at the age of 79. The apartment featured a window overlooking the auditorium, so he could watch movies while lying in bed.

The November 5, 1955, issue of Boxoffice mentions the Webber Theatre in an article about unusual features of various Denver theaters. At that time, the Webber sported a small zoo in its lobby, with hamsters, white mice, and a deodorized skunk among its denizens.

The Webber shows up again in the April 27, 1964, issue of Boxoffice, in an item headlined “Denver Webber Renovated and Becomes First Run.” Among the features of the renovation were deep red loges, red and beige carpeting, and new beige satin drapes. A new screen and projection equipment were installed, and the marquee updated. At this time, the Webber was being operated by Atlas Theatres.

Here is a photo of “The Webber” in tiles at the entry to the theater.

The photo of the Webber above must have been taken around the time of the world premiere of CANON CITY in July of 1948. The film was shot at the state penitentiary in Canon City, and for the premiere, the facade of the theater was made to look like two prison towers. According to Variety: “As one of the bally stunts, EL [Eagle-Lion] is building prison towers on the marquees of the Webber and Denver theaters in Denver. In the tower will be posted a guard manning a phoney machinegun and searchlight. Every half hour, 12 guys hired for the stint will simulate a break from the tower while the gun pops away and sirens sound off.” Wild! If anyone has more pictures from this premiere, I’d love to see them.

An extensive gallery of recent photos of the Webber Theatre, including glimpses of the attic and mechanical spaces, can be seen on the building’s LoopNet listing. The vacant theater and an adjacent empty lot are being offered at $2.7 million.