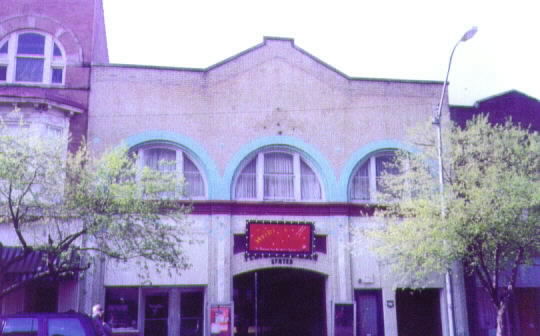 The Strand Theatre opened in 1915 at 642 Wheeling Avenue and closed in 1958. The theatre was restored and opened again on September 10, 1977 as the Cambridge Performing Arts Centre.

The first theatre on the site of the Strand Theatre was the Avenue, which opened on January 23, 1907. Later that year the Avenue Theatre became the Orpheum Theatre, managed by Charles and George Hammond. Opening night was October 22, 1907.

The Orpheum was not a plush theatre and it only seated about 100 people, but its Vaudeville shows were the rage of the day. Prices were 5 and 10 cents, with 5 cent seats being chairs in the back and the 10 cent seats being benches up front. For variety, the management changed shows three times a week so there were always new acts appearing on the Orpheum’s stage. It was open every evening at 7:15 and 8:15.

The Orpheum closed on April 15, 1915 and a new theatre, the Strand, was then built on the same site at a cost of $50,000 including $10,000 for a fine pipe organ. It opened the day before Thanksgiving in 1915 with a movie entitled “Graustark,” starring Beverly Bane, Francis X, Bushmane and Edna Mayo. The Strand continued to operate as a movie theatre for 43 years until it closed in 1958 by the owners, the Shea Corporation. Two generations of Guernsey County movie-goers had grown p with fond memories of the Saturday matinees, the serials and the cowboy shows at the Strand.

In 1976, the Cambridge Performing Arts Centre was organize under the direction of Don Mercer for the purpose of restoring the Strand Theatre as a place where live theatrical entertainment could again be presented in Cambridge. On September 10, 1977, after almost 20 years of rest, the doors reopened with the musical Gypsy.

Live theatrical entertainment will continue to be presented “for the enjoyment and edification of our patrons.”