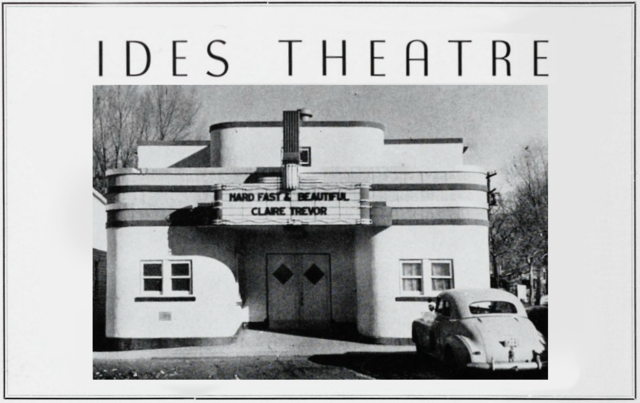 The Ides Theatre was opened in the mid-1930’s. It was renamed Holiday Theatre in the 1960’s. It was demolished for a bank parking lot.

This Moab Times article about one man’s recollections of this cinema says this theater was originally the Ides and was renamed Hollywood in the 1960’s by new owners after it was sold by the Clark family:

Page 79 of the book “Moab and Grand County (Images of America)” by Travis Schenck and Museum of Moab shows a photo of the Ides with some text about its history, saying “The Ides Theater on Main Street brought cinema to Moab” when it opened in the mid-30’s, was named after the Ides of March as it opened on a windy rainy day, used phonograph recordings of actors’ voices during the talkie era, and that the Clark family that originally owned it sold it during the uranium boom.

I discovered the book in August of 2017 during my “Moab – Red Rocks Trip” and just viewed the page using the Look Inside function on the book’s Amazon listing and typing in the search term “Ides”.

I asked the woman at the front desk of the Museum of Moab who described the theater’s former location as being the parking lot shown in the Street View image above, which is next to a Wells Fargo as mentioned in the article of the man‘s recollections.

An archive of articles spanning decades of the Ides Theatre’s life in this and its previous location at Woodmen Hall: