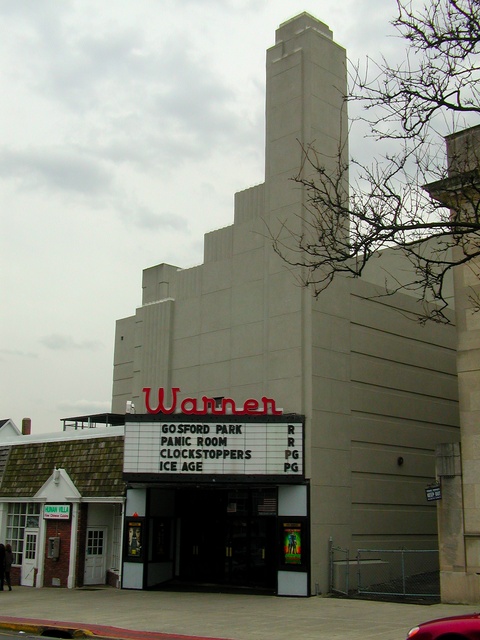 Opened on June 15, 1932 with Warren William & Bette Davis in “The Dark Horse”. This 1,542-seat Art Deco style neighborhood palace was originally part of the Warner Bros. Circuit Management Corp. The Warner Theatre later became part of the Stanley-Warner chain and then the merged units of RKO-Stanley-Warner.

As the decades worn on, the Warner Theatre lost its grand, signature Warner sign. It was twinned on June 26, 1978. In 1981, Cineplex Odeon purchased the theatre and converted it into a four screen house on May 23, 1984 and renamed Warner Quad. Operated by Clearview Cinemas circuit since 1998, in June 2013, Bow-Tie Cinemas took over, as that chain took most Clearview locations. The Warner Quad offers a healthy diet of first run commercial and art house fare and its asymmetrical Art Deco style façade continues to highlight Ridgewood Avenue.

I grew up in Ridgewood and have fond memories of the Warner and its grand marquee with yellow and white chaser lights. The YMCA would take a group of kids there on Saturday mornings to see cartoons. Lots of fun for 50 cents. Also saw many movies there on its big screen. There was only one screen then. The theater had a balcony too. I remember seeing “The High and Mighty” and “Spencer’s Mountain”, two movies I still recall in detail. Good memories. Glad to see that it’s still open.

Yeah, it’s amazing how many movies I remember seeing there! So simple on the outside; so opulant on the inside.

Saw my first Bond film (“Goldfinger”) at the Warner just after I turned 13. Many of the biblical epics of the late 50s/early 60s showed there, so there’s a good chance that “Ben-Hur” was one of them.

I remember seeing “Goldfinger” there too! But it was in a double-feature with “Dr. No,” so it was probably a second release. They used to do that in the days before DVDs.

I remember seeing “Indiana Jones and the Temple of Doom” here in September 1984 (for the fourth and final time that year), and also “Last of the Mohicans” in October 1992 when I returned to the area for a visit. (In 1984, I lived in Saddle River with my family – I also attended Fairleigh Dickinson University in Teaneck – and in 1992, I was living in the Detroit suburb of Southfield, Michigan.)

Please update, it became a twin on June 16, 1978. Just uploaded ad from The Bergen Record

Please update, total seats 1041 Theatre 1 324 Theatre 2 319 Theatre 3 and 4 199 seats (Theatre 3 and 4 upstairs and is NOT ADA) The lower seat count due to more comfortable seats put in by either Bow Tie Cinemas or Clearview Cinemas the previous onwers.