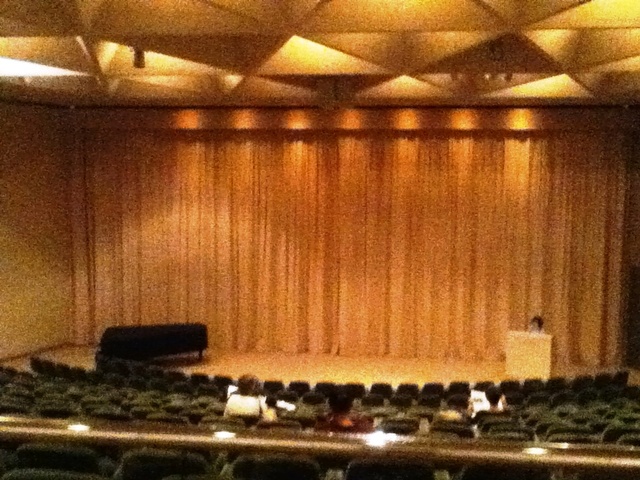 The National Gallery of Art is one of the world’s greatest art museums, and is open free of charge. The East Building was built between 1974 and 1978. Designed by famed architect I.M. Pei, it is an architectural masterpiece of modern design. It displays modern art. An underground tunnel connects to the West Building, a building with very ornate interiors and which displays art before the modern period. Travel the tunnel to the West Building to enjoy art and architecture, and also for food cafes.

Films are shown afternoons, each weekend, starting Fridays, including 35 mm films. The program is of classics, arthouse, and often documentaries about art. There is a piano on stage to accompany silent films. A curtain is opened to reveal a large screen that appears to be thirty to forty feet wide for scope films. The ceiling is honeycombed. At the start of the film, blinds descend to cover three giant windows, otherwise open to the foyer. The auditorium hosts lectures and other programs, in addition to films.

There is no admission charge for movies. The auditorium opens thirty minutes before the film start. Policy is first come, first served. Lines sometimes form, as early as one and a half hours before the movie, and very popular films result in a full house with people being turned away. No food or drink is permitted in the auditorium. As there’s no aisles and no "reserved seating" restroom breaks are difficult.

Exterior of the building:
View link

Exterior from the side that faces the West Building:
http://www.flickr.com/photos/iainr/65202562/

Is this what is now called the new Warner Brothers Theatre?

No, the Warner Brothers Theater is a remodeling of the old Carmichael Auditorium within the National Museum of American History which is also on the Mall in Washington but not physically connected to the National Gallery of Art.

question: does anyone know what DCP unit/projector is being used for the digital projected films? I shot them a message via facebook awhile back and have never received a response [how rude!] While I won’t go into the esoteric films mentioned in the latest ‘Summer 2013’ guide – two DCP presentations stand out: ‘The Life and Death of Colonel Blimp’ – which for anyone who’s seen Criterion’s bluray is beyond stunning. ‘Glory’ which I assume is from the recent 4K scan is having a Washington premier on Sunday Sept. 15 with an introduction by director Ed Zwick.

since this isn’t mentioned in the theater overview outside of the AFI Silver, the National Gallery can nearly screen every type of “film” presentation (except 70mm): 35mm, 16mm, HD-Cam, DCP, digibeta

The entire East building of the museum is under renovations until it’s reopening in 2017. As a result the film series have been relocated to other theaters including the museum’s own West Building Lecture Hall.

On a technical note, the DLP system that is part of the theater’s system is a 2K Barco DP2000 digital projector.

as of a July article from an online story from the Washington Sun:

“After remaining dark for more than a year because of the ongoing renovations in the East Building, the Gallery’s Auditorium—one of Washington’s finest theater spaces—will open again this Saturday for free public screenings on weekends only.”

has anyone been here lately? This theater’s sound system never featured surround sound, or does it, with the museum renovations?