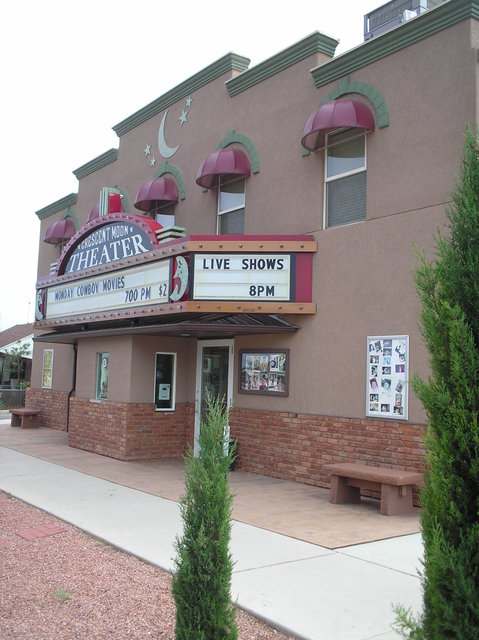 Built in 2002, the Crescent Moon Theater was built to look like the quintessential small town theater of a by gone era. The 180-seat theater was named after the Crescent Moon Ranch, owned by Nick Dunkin, a real life cowboy, who came to Kanab in the mid-80’s. His wife built the theater in memory of her late husband.

The theater is currently opened six nights per week. It has 35 mm and 16 mm film projectors as well as digital. It has beautiful red curtains, lit by red pin spots that open a close before each motion picture.

The lobby walls are covered with classic posters and memorabilia, including vintage motion picture cameras.

Although the theater does run some first run movies, the focus in on classic cinema. The theater runs at least two classic films per week including one Western on Monday night.

Tuesday is classic film night featuring the best cinema Hollywood has to offer.

The theater will have at least six film festivals each year including two major events which should draw from outside the city of Kanab.

The City of Kanab, which is located in Kane County, Utah has a rich film heritage. Almost every major star from John Wayne to Clint Eastwood, have made major films shot on location amidst the majestic red rock canyons of Kane County.

Gary Bouchard who is the current director says that he plans to spotlight many of the films shot in this area in the upcomming festivals.

In addition to film, the theater will also be hosting live concerts, featuring classic western music and cowboy poetry.