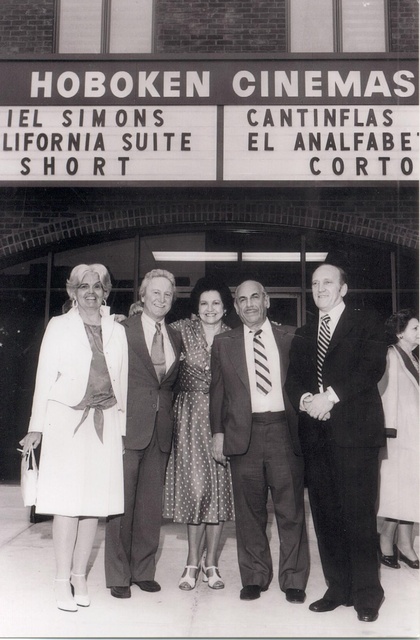 Hudson Street Cinemas was a small, two screen theater located on the corner of Hudson Street and 1st Street in Hoboken. It was located inside the Marine View Plaza.

The theater had a tiny lobby that was possibly less than 15 feet from the doors to the candy counter. The Hudson Street Cinemas was closed in 2005 and the space is now occupied by a branch of HSBC.

A new theater will open next week bringing moviegoing back to Hoboken.

The Hoboken Twin located on Hudson Street was owned by my family Orjelick-Theaters. At its peak my grandfather owned 15 movie theatres. Many closed prior to when I was born in 1976. They were small family theaters that usually had 1-2 screens. Many of theaters included spanish films at one time. In an article I found about the Orjelick-Theatres dated June 11, 1987 it stated, “One by one, those theatres went under unable to survive the advent of the suburban multi-screen franchise cinema…By the 1980’s the Orjelick-Theatres had dwindled down to three properties to include the Art Theatre in the Bronx, the New Delancy in Manhattan and the Hoboken Twin in NJ.” The only other theater I remember that my family had owned was called the Coliseum Theater and was located in NY (52nd St & 4th Ave). Best :)

Thanks for the new pic lost memory. I have many happy memories of the old theater when my grandpa owned it but it still looks so similar in your 2002 pic :)

My actor cousin Bob Greene, born in Hoboken, played a cop in the 1995 movie “Copycat”, starring Sigourney Weaver and Holly Hunter. A lot of our family members got together to see his movie at the Hoboken Twin on its first night. It was the closest I ever got to attending an opening night premiere.

I lived in Hoboken for several years, and saw quite a few movies here, including Spider-Man 2, Tospy-Turvy, Being John Malkovich, and X-Men 2. The theater’s programming was interesting, as they would often divide the two screens between art films in one, and blockbuster films in the other. It was a nice change of pace from specializing only in one of those two types of films. If I remember correctly, Hudson Street ran Rocky Horror on Fridays at midnight for many years, though I never attended it.