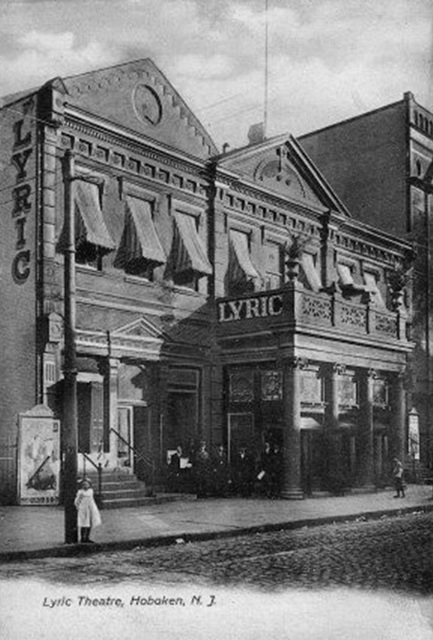 This one goes way back to at least 1907: from View link

Originally published in 1907
THIS WEB VERSION COPYRIGHT 2003 GET NJ

BESIDES the fine City Hall, occupying an entire square at the lower part of the city, the eight commodious school houses, with the handsome ninth in course of construction, the Free Public Library, the seven fine fire engine houses, and the Post Office, the city boasts of a number of splendid edifices, among which may be mentioned the Lyric Theatre,the Empire Theatre, ….

“Hal LeRoy’s first professional job was in "Hoboken Heroes” at the Lyric Theater, Hoboken, NJ. in 1928."

A six-story office building that will fill what is now a parking lot in Hoboken has been designed to evoke the image of a 19th-century theater, the Lyric, that once stood on the site.

The new building, Offices at the Lyric, will take shape in the next seven months in the city’s historic district and close to its transit hub. While the 70,000-square-foot building will have the latest high-tech wiring, it is being built with materials — precast concrete, limestone and brick — similar to the 1886 theater. Portions of the new building’s facade also will feature the Queen Anne style of the Lyric, said Rob Ranieri, who is developing the $14 million project with Louis Picardo. Both are Hoboken natives.

Until the 1940’s the Lyric presented such celebrities as Lillie Langtry, George Burns and Gracie Allen, Jack Benny and Bob Fitzsimmons, the boxer turned actor. By the middle of that decade the timeworn theater was razed, and two years ago the developers bought the site at 79 Hudson Street.

Offices at the Lyric will be occupied by small and midsize tenants and ‘'will fill a market niche in the land of corporate giants and high-rise towers’‘ along the Hudson River waterfront, said Dudley Ryan of CB Richard Ellis, the commercial brokerage that is the project’s leasing agent. Rents per square foot will be in the high $30’s.

To design the building, the developers along with the architect, M. J. S. Architects of Dover, worked with Hoboken’s Historic Preservation Commission and followed photos of the old theater, one of six that the city has lost to time and neglect. Like the Lyric, the new building will have a peaked roof, and the second story of its facade will also have a peak, to echo the actual height of the vanished theater. The first two floors will feature columns and details like dentils and rosettes that were found on the Lyric. But a four-story-high central glass panel rising above the second story will highlight the building’s newness, Mr. Ranieri said.

To work financially, he said, the project was granted variances by the city to rise above the five stories allowed by zoning and to fill the entire site without providing onsite parking. The partners also applied for a license so that the building’s entry could jut six to eight feet onto the sidewalk in a style reminiscent of the theater’s ticket booth.

The developers plan to display a piece of a column from the original theater in the new lobby along with a history of the Lyric. Leonard Luizzi, the city historian, said the project ‘'will show Hoboken is more than restaurants, bars and double-parked cars.’‘ RACHELLE GARBARINE

See:BORN IN A BEER GARDEN(1930) by Christopher Morley, Cleon Throckmorton & Ogden Nash. In 1929, Morley, Throckmorton, Milliken and Gribble staged a 19th century classic in the Lyric entitled: THE BLACK CROOK. In 1867, Charles Dickens saw that play at Niblo’s in NY. He described it: “Niblo’s great attraction, ‘The Black Crook,’ has now been played every night for sixteen months, and is
the most preposterous peg to hang ballets on that was ever seen. The people who act in it have not the slightest idea of what it is about, and never had. … ” Dickens concluded that the Black Crook was a malignant hunchback who was trying to keep two lovers apart but was defeated by the powers of Lightness in the form of 60 Amazons.

building has no lobby, just hallway leading to elevators and doctor’s office…

Was this know as Loews Lyric?