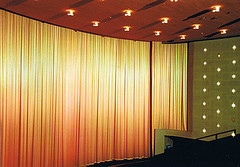 Originally opened in January 1914, the cinema was completely redesigned by G. Allen Fortesque and reopened November 17, 1930. It was known as the Deansgate Picture House and was one of the most popular cinemas in Manchester city-centre. By 1937 it was part of the H.D. Moorhouse Circuit. It was later operated by the Brennan’s Cinemas Ltd. chain.

It was taken over by Associated British Cinemas(ABC) in 1959, and was extensively modernized in September 1960 when a huge screen was installed and the adverts ran ‘Manchester’s most intimate Todd AO theatre’ screening a revival of “Oklahoma!” starring Gordon MacRea.

The auditorium, supremely comfortable, now seated 450 in the stalls and 250 in the balcony, and was decorated with twinkling star shaped lights.

In 1971, a second cinema opened, the 167 seat ABC 2, formed out of the former café. Again a plain but comfortable cinema.

Ian Grundy recalls, “I remember watching "Earthquake" here and nearly hitting the ceiling when the Sensurround system cut in - the cinema seemed in imminent danger of collapse!”

ABC was bought out by Cannon in 1986 and on August 9, 1990, both screens closed. After lying boarded up for a while the building was converted to a bar for the J.D. Wetherspoon chain of pubs, named The Moon Under Water, retaining much of the former original cinema.

Another picture here when still a cinema:–

The first Todd-AO presentation was ‘Porgy & Bess’ which, unusually, was shown as a continuous performance rather than as a roadshow presentation with pre-booked seats. Later, I recall seeing ‘Dr Zhivago’ in 70mm. When the screen curtains opened they became jammed thus obscuring part of the screen. The film was stopped after about five minutes when the manager came on stage, tugged at the curtains and was able to clear the screen. Then the film started again from the beginning.

Saw “Percy”, “Clockwork Orange” and “The Omen” here where, to add to the drama, you were picketed by Christians on the way in and saw nurses with stretchers in case of fainters inside…

Did Management relief duties at the ABC Deansgate in the early 1970’s when Ken Pickering was the General Manager there. Always a busy house.

abcman – I worked there also as a T/A/M under Ken Pickering around that time. We also had Dennis Davidson as A/M. At that time we were playing ‘Where Eagles Dare’ which ran for 26 weeks. Perhaps we crossed paths? my contact email is

A small cinema with a big feel – the ABC Deansgate used to be solidly booked for weeks and months ahead which gave it an air of exclusivity and was known as the cinema you could never get into.

Not everyone appreciated this intimacy, however, and when ‘My Fair Lady’ had its roadshow run there a friend of mine, whilst having his hair cut at a Manchester Barber’s, overheard a conversation in which a disgruntled person said “Fancy showing a lovely film like ‘My Fair Lady’ in a poky place like the Deansgate when we have the Gaumont!”

He obviously did not understand product alignment and agreements between certain distributors and exhibitors and,of course, why should he have? – his sentiments were,after all,quite valid.

ABC, of course, had at one time operated the Theatre Royal, Peter Street, which became Manchester’s cinerama theatre. They later purchased a valuable site on Oxford Street on which was to be built a prestigious ABC but I understand that this did not materialise because they received a very generous offer from a developer for the site. When that company once again addressed the matter of not having an actual city centre venue in Manchester(they had many large cinemas on the periphery the best example being the huge Apollo Ardwick), the only place available was the small, but generally highly regarded,Deansgate Picture House which included a busy restaurant. At this time it was part of the Brennan’s Circuit(which included the Queen’s Theatre, Blackpool)whose Head Office was at the Deansgate.

This opened as the Deansgate Picture House on January 15th, 1914, as the “most luxurious picture theatre in the country” according to the grand opening ad, which can be seen in the photo section. 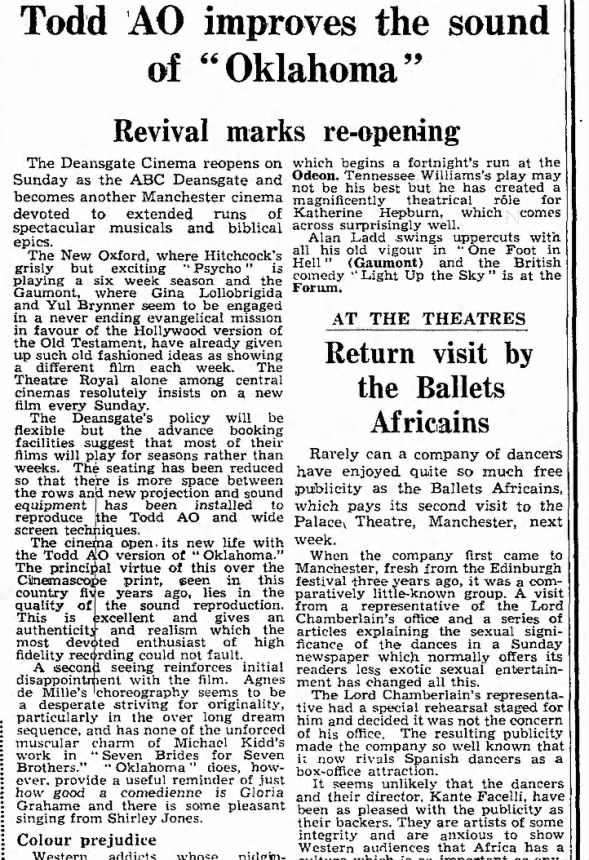