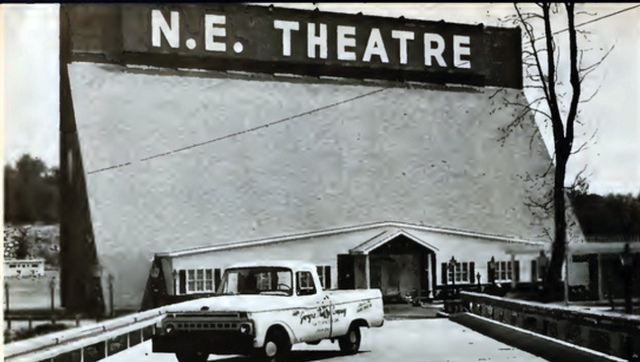 This drive-in was located just up I-85 from the Storey’s North 85 Drive-In. Actually it could be seen just past I-285 on the northeast corner of the intersection. This was a Georgia Theater Company operation and originally it was a single screen drive-in which opened September 11, 1963 with “Hootenanny Hoot” and “Where the Boys Are”. It was converted to a twin on June 6, 1975.

What killed this drive-in was the creation of Spaghetti Junction. I believe it closed around 1983.

I absolutely LOVE these photographs. Thank you Alonzo Jeter
http://cliffcarson.com

Thanks for those great pictures Alonzo. They really bring back some good memories. From the look of them they might be from opening day. The interchange in the background does not look very heavily developed, and the overhead shot shows the field extending only to the point of the concession stand. When I first attended a movie here in 1971, the field extended a good ways further back. I also did not know that there was a picnic area on top of the concession stand. I can say for certain that it was not there in 1974 when I first worked here.

The shot of the marquee is nice, but in later years a second marquee was added underneath and was used to list coming attractions. Looking under the marquee and at the picture with the truck, it is easy to see that the house for the manager was located in the screen structure. It was a very nice, good sized house, but the screen area was so big there was plenty of room in the left side for a speaker repair shop and yard equipment storage. Look closely and you will see that you could just walk in the front door from lot level. Also notice that the truck is sitting on a bridge. In the early 70’s the creek under the bridge rose out of its banks and flooded the house and boxoffice. To protect the managers house, a wall was built around the front entrance up to the window level.

That worked well until March 25th, 1975, when a much bigger flood washed over the wall and through the windows, once again flooding the manager out. This was an especially cruel twist of fate in that the managers house from the recently closed Bolton Drive In had been moved onto the back corner of the lot and within a week would have been ready for the manager to move to higher ground. The manager, Mr. Lewis Vickery, took it all in stride.

It was during this time that construction was underway to twin the place by regrading the back half of the lot so the ramps faced south. Again, the lot would have been repaved in another week, but when the water receded it took most of the new ramps with it. The twinning was eventually finished and this was the way the place looked until about 1982 or so. Then, the I-285 / I-85 interchange was rebuilt and greatly expanded. This expansion took out the access road, the bridge, the marquee, boxoffice, entrance, and then entire screen complex. A smaller steel frame screen was built much closer to the projection booth and a new box office and entrance was built at the end of a new access road cut from Northcrest Road.

Also at this time a steel storage building was built between the concession stand and the managers house to house Georgia Theatre Company archives. In the late 80’s, after GTC had sold itself out to United Artists Theatres, I heard that all of that material had been scooped into the dumpster when UA closed all of the drive ins. I am glad to see that Alonzo has managed to find a few images from some of these places that I enjoyed working in during the days when theatre work could be a pleasure as well as a job.

That is a far cry from the pictures I took after it had closed.Glad Clifford got to see Alonzo' Pictures.

NO Mike, BOTH pictures were equally important. I compared both of them last night. It was fascinating.
latest edit [url]http://www.youtube.com/watch?v=R1ePhtYEFwQ[/url]

This was a neighborhood Drive-In theatre. If I had known it was going to be torn down I would have taken pictures. I moved to Los Angeles and when I came back it was torn down. Of all the Drive In Movie theaters I’ve been to in my life, and I’ve been to alot, this was by far my favorite. There was something magical about that little dead end road that one had to drive down to get to this Drive-In. Sad looking back at that era that is no longer and the people that were around then that are no longer around now. The warm spring and summer nights with all that dreaming. The memories I have at the N.E. Expressway Drive-In are all good memories. It was another life then and another me. I tell myself not to look back. It drags at your heart till you can’t do anything but look back.

This opened on September 11th, 1963. Grand opening ad in the photo section.

Opened as a twin with on screen 1 with “Frogs” and “Bug” and screen 2 with “Live and let die” and “The man with the golden gun”.