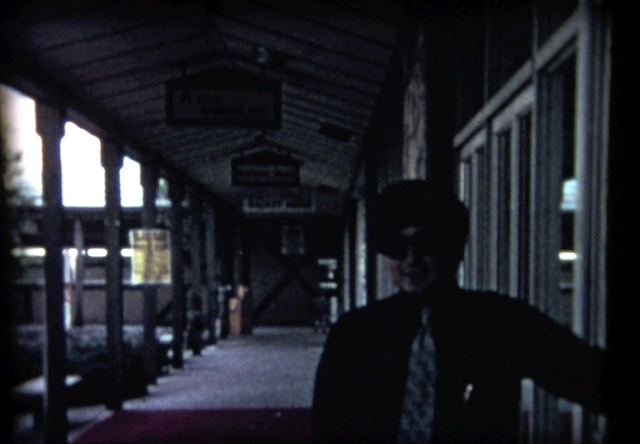 Opened by Martin Theatres on April 16, 1965 with Hayley Mills in “The Truth About Spring”. Originally a single screen theatre, I cannot recall anything notable about this theatre aside from it having relatively large screens for a twined cinema. Must have really been spectacular when it was a single screen. The Village Theatre was tucked away in the corner of the circa 1967 Briarcliff Village Shopping Centre. It was converted into a retail establishment in the early-1990’s.

During the 60’s the Briarcliff Village Theatre was often filled to capacity, especially on rainy saturday afternoons. The host of the once popular WPBS CINEMA SHOWCASE and CREATIVE LOAFING film critic JIM WHALEY managed it for a while. When it was one big screen it was wonderful. Once it was turned into a twin theatre it lost it’s magic. For a while there is was really quite wonderful. It closed in the early 90’s. The last films to be shown there was THE ABYSS and DEAD POETS SOCIETY. The films I saw there as a child are countless.
BARBARELLA,
HOUSE OF DARK SHADOWS,
PUFNSTUF,
OLIVER!,
KANSAS CITY BOMBER,
MYRA BRECKINRIDGE,
THE IMPOSSIBLE YEARS,
DARLING LILI,
THE SOUND OF MUSIC,
RYAN’S DAUGHTER,
PIPPI LONGSTOCKING,
DOCTOR ZHIVAGO
SNOW WHITE AND ROSE RED,
EYE OF THE CAT,
WHATEVER HAPPENED TO AUNT ALICE,
THROUGHLY MODERN MILLIE,
WITH SIX YOU GET EGG ROLL,
ANGEL IN MY POCKET,
TOM SAWYER,
LOST HORIZON,
SONG OF NORWAY,
THE OTHER SIDE OF THE MOUNTAIN,
SLAP SHOT,
CHARLOTTE’S WEB,
A BOY NAMED CHARLIE BROWN,
THE CHEYENNE SOCIAL CLUB,
TRUE GRIT,
EASY COME, EASY GO

and many many others … .

I also remember vividly seeing SCROOGE and FUNNY GIRL many times at the Village Theatre.
http://www.youtube.com/watch?v=JWXjFHqc7gc

Yeah, it was definitely around until the late ‘80s. I don’t think I saw anything there past '85 or so. “E.T.,” “Song of the South,” “Bambi,” “The Muppets Take Manhattan” and “Top Gun” are the titles I definitely remember seeing.

Yes, I was very young.

Saw the original “Superman” here the summer of 1979. Packed house. “The Deer Hunter” was playing next door. Did this theater do good business as a discount house? I remember the auditorium being a good size. Even a little bigger than South Dekalb since it got quadded.

Second point first. Being Ultravision, the South Dekalb auditoriums were almost square and had 540 seats. So when split they were not quite as long as Village and Suburban after twinning but with 338 seats were almost as big. In all three cases, they used the seats removed for the wall to add rows in front. I was only in the original Village a couple of times but I recall thinking that it had a wider and shallower auditorium than the Eastern Federal houses where I was working at that time.

I worked at the Village for most of the summer of 1974 and got to know the twins well. They might have been a little wider than South Dekalb because I remember that they had six seats per row on the new wall side and seven on the outer section. However South Dekalb and Suburban had rockers and the Village had smaller stationary seats so that might have been the reason. I was one of the unfortunates who was tasked with the job of pulling and reinstalling those Village and Suburban seats. At the Village, two men could move a seven seat row by themselves. At Suburban we had to break them up into threes.

As to your question about business, my stock answer is that any theatre, given the right movie at the right time will pack ‘em in. I can remember capacity crowds at almost every theatre I ever worked in. I even saw them shut the gate at the Starlight Drive In to avoid a gridlock because all of the fields were full and the driveways as well. I can remember full houses at the Village both before and after the dollar days which started about 1977 due to the opening of the GCC Northlake in the summer of '76.

Georgia Theatre almost never sold out of a location and I did see them close a few down, like the Hammond Square. So, since I was obviously wrong in my earlier comment about the Village closing in 1978 instead of maybe as much as 10 years later, it probably made money as a dollar house. If they got a big movie that had not played at Northlake they could do pretty well. Superman played at Stonemont and Buford Highway so Village was well positioned to draw new crowds when they got it.

As to the closing date of the Village, I think that can probably be guessed as sometime after 1987. That was the year Georgia Theatre sold out to United Artists Theatres. UA wanted an Atlanta presence without having to build one up so they just bought GTC just as Regal later bought up Storey. Those people came in here with a vengeance intent on getting rid of as many of the GTC people as they could as soon as they could. As they were only interested in locations like the Lenox, Southlake 8, Shannon 8, and Greens Corner, this applied to theatres as well.

All of the drive ins and the rest of the indoors were soon closed up and their employees let go. No effort was made to match the managers, projectionists, or janitors with openings that the theatres they were keeping open. Indeed, those people had been moved out with the same undisguised glee as the people at the closed up locations were. Those of us lucky enough to stay in the business by finding jobs at other theatres had the pleasure of watching this initial group of thugs kicked out when UA went through an ownership change, and later that group hit the road when Regal took over.

Sometimes payback is not a bad thing.

Great Stan, thanks always for the valuable info. Only went to this theatre once I think. It probably shut down in the mid 80’s especially when AMC Northalake 8 came along.

The Briarcliff Village theatre closed in the summer of 1992. The last film to play there was DEAD POETS SOCIETY and THE ABYSS