Opened May 5, 2006 as Apex’s only multiplex cinema, located on the opposite side of the Beaver Creek Shopping Center, at the intersection of Highway 55 and U.S. 64, between Apex and Cary. First owned and operated by Charlotte based Consolidated Theatres, it is now operated by Regal.

The Piggly Wiggly is now Scott’s Food Center. And Dallas' Chicken and Biscuits is still in operation not to mention the local Hardees.
Small as Apex is a lot has really changed since the opening of the Beaver Creek Commons Center in 2003(which used to a former car dealership). The cinema opened two years later in 2005. Regal Cinemas is about to expand even more in Wake County too. Construction is set to build two more Regal Cinemas in the towns of Fuquay-Varina and Knightdale.

Also to point out that Edwards Theatres based out of Cailfornia is constructing a huge 30-plex cinema located in North Raleigh off Capital Boulevard near the Triangle Town Center Mall. The first multiplex to be build in the Triangle area and the first theatre chain to be based in North Carolina too.

AMC Theatres is also putting up another multiplex too in Raleigh,which would be the chain’s second location in North Carolina,the first in the Triangle area.
The other location is in Charlotte. Did you know that AMC Theatres was the first chain to open a multiplex in this state? In Greensboro,at Carolina Circle Mall in 1976(one of the first AMC theatres chain in N.C.)

Edwards Theatres is part of the Regal Entertainment Group.

Charlotte based Consolidated Theatres opened the Beaver Creek Commons Cinemas on May 5,2006 and by mid-2009 was bought out by Regal Entertainment Group after its acquisition of Consolidated Theatres. It was Apex’s first multiplex theatre to operated in the town. It serves the areas of Apex, Cary, Holly Springs, Carpenter, Morrisville and as far as Fuquay-Varina and even as near as Jordan Lake and nearby Pittsboro(in nearby Chatham County).

FYI: The Beaver Creek Commons Shopping Center opened in 2003 at the intersections of Highways U.S. 64 and N.C. 55 on development that used to be a former car dealership. The main anchor stores are Lowe’s Home Improvement, Super Target, Kohl’s, T.J. Maxx/Home Front, Kirkland’s and H.H. Gregg(which used to be the former Circuit City)along with other specialty stores and services.

Before it became Beaver Creek Commons from what I remembered from back in its heyday….a former Chevrolet-Buick car dealership,and empty pastures of nothing but corn and tobacco fields not to mention country barns and that was it….before it was torn down and turned into a shopping center megaplex. From what I remembered of Apex years ago(go back some 25 and even 30 years ago)…when the intersections of Highways 64 and 55 were nothing but two-lane back country roads alongside cow pastures and barns…Apex was very Mayberry like with nothing but the local Piggly Wiggly grocer(now Scott’s Food Center),and the local Dallas' Chicken and Biscuits and the local Hardees(always a fan favorite),and that was it…..

The former Piggly Wiggly(now Scott’s Food Center),along with Dallas' Chicken and Biscuits are still there in Apex. But the small town look has completely gone with most of it on the outskirts of the city. But in perspective,the Hardees is still there right next door to Dallas' along with the former Ramada Inn and Seafood Restaurant that is now being taken over by pop ups of McDonald’s and Wal-Mart,not to mention the local Waffle House.

This theater is now known as Regal Beaver Creek Stadium 12 according to the Regal website. 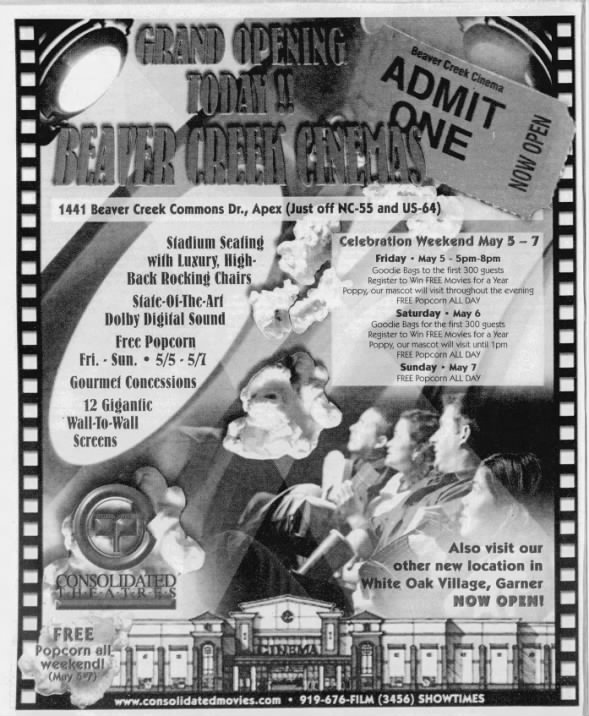