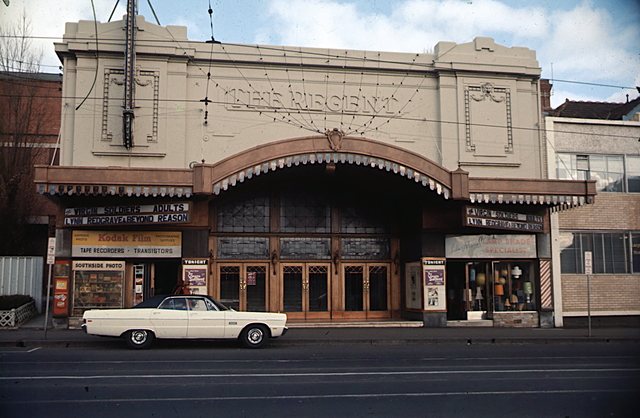 Located in the southeast inner city Melbourne district of South Yarra. The Regent Theatre was built by the Associated Theatres chain and opened on 25th April 1925 with Thomas Meighan in “Wanderer of the Wasteland” & Norma Talmadge in “The Only Woman”. It boasted a 14-piece orchestra. It was designed by Ballantyne and Hare and was the first of the fabulous Regent Theatres that were designed by Cedric Heise Ballantyne. In 1926 Associated Theatre joined up with Hoyts Theatres. It screened its first ‘talkie’ George Jessel in “Lucky Boy” on 8th July 1929. “The Robe starring Richard Burton was the first CinemaScope film to be screened on 7th April 1954.

The Regent Theatre closed on 1st July 1970 with Hywel Bennett in “The Virgin Soldiers”. It was used for a while as a rock ‘n roll nightclub which only lasted for a year when it was closed due to a fire. and was demolished two years later.

A lady I knew in America wanted to open a pizza parlour in Melbourne which would have featured a Wurlitzer organ plaaying nightly, and I would have been manager. I had proposed converting the stalls for the restaurant side with an intimate cinema in the former circle. Much the same as the State theatre in Flinder St. was converted by Greater Union in 1962. The theatre was subsequently destroyed by a suspicious fire.