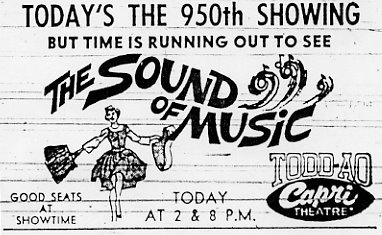 The Uptown Theatre opened October 31, 1935. On November 10, 1960 it was renamed Capri Theatre. It was a neighborhood theatre located on the west side of Des Moines, Iowa. Its site was the 4100 block of University Avenue.

The scan is a bit blurry, but the photo at the bottom of this page of Boxoffice, August 5, 1950, shows the Uptown when it was still sporting its 1930s moderne facade, complete with three porthole windows above the wedge-shaped marquee.

During the 60’s, I worked at the Capri for Bob Fridley (see above) and also other Des Moines theaters including the Varsity and for Bev Mahon at the Holiday. The Capri was just about the finest “60’s roadshow house” I have ever seen, superb presentation. It was enlarged from the old Uptown in 1960 specifically to play Ben-hur, with the screen dimensions perfectly set for “Camera 65/Ultra Panavision 70”. Many other roadshows such as El Cid, Mutiny on the Bounty, Lawrence of Arabia also played there. I saw many 70mm films at other theaters around the country as well as the Capri, and the Capri was the hands-down winner for presentation. Sadly, we have lost most of these houses.

I saw “The Sound of Music” at the Capri in 1965, when my family drove down from Ames. I was five years old. It was my first movie and I thought it was the biggest place I’d ever seen. Pure theatrical magic. I remember an upstairs loge area (for smoking?). We moved to Des Moines in 1969, and I later saw movies there during high school. It wasn’t as big as I remembered, but it still had style and class — a certain “chic.” It was a small gem of a theater, and to me looked like a place right out of “Breakfast at Tiffany’s.”

It was a terrible shame when it was turned into a video store that is now close. I would love to see returned to an art theater similar to the Varsity but to redo it to look like it did as the Uptown.

The building has been remodeled again, now with a bland front, and it houses an animal hospital and a State Farm insurance agency. I would expect that the floor has been leveled, so there probably won’t be a theater here again. At least that appalling diagonal wood front from the 1970s is gone.

Among dozens of vintage photos on this web page are two shots of the Midcentury Modern Capri Theatre front of 1960, which the diagonal wood covered up later. I like Midcentury design, and the Capri was nicely done, but my personal preference would have been to see the original 1935 Streamline Modern facade preserved and restored. Hardly anybody valued Streamline Modern in 1960, though.

It was 50 years ago today that “The Sound of Music” premiered at the Capri. With a reserved-seat run of 113 weeks, it’s surely the long-run record holder for this venue. (Anyone know of something that ran longer?) It was one of ten runs in the United States and at least 24 globally that ran the movie continuously into a third year.

Linkrot repair: The 1950 Boxoffice article about the Capri Theatre (and other Des Moines houses) is now here:

I think the world record run of a movie was Emanuelle at a theatre somewhere in(Paris, France i think?), about 18 years(i think?).