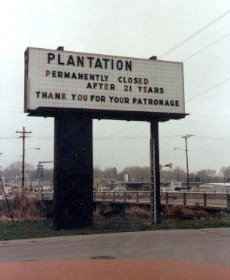 The Plantation Drive-In opened in 1965 with a car capacity of 950. The drive-in lasted until 1986 when it closed. It has been demolished and is now Sands Volley Ball Club.

A couple of pictures can be found here – although the auothor of this blog has the closing date listed (incorrectly) as 1987: View link

Here is a December 1965 ad from the Des Moines Register:
http://tinyurl.com/nzwosl

As of June 2009, the marquee at the Grand Avenue entrance (or at least the bottom portion of the marquee) is still standing – with Sands Volleyball Club signage. The box office is still standing as well, although the glass has been replaced or covered over with plywood. The screen and it’s supporting steel structure are no longer there.

Here’s the text of an interesting article about the opening of the Plantation Drive-In from the August 16, 1965 issue of BoxOffice Magazine:

DES MOINES – The 950-car Plantation Drive-In opened here recently boasting the largest screen in the Midwest-50x120 feet. The airer is operated by Richard Davis and Clay Rusk, owners of the Pioneer Drive-In here, and Bob Fridley, who operates the Capri and Varsity (Des Moines), the King (Ida Grove) and Capri (Lake City), all indoor theatres.

The all-season airer is equipped with 402 auto heaters and an air-conditioned concessions building. First-run films are scheduled through October. Jim Walker is manager. Rodney Davis is his assistant.

This opened on July 2nd, 1965. Ad uploaded in photo section.

Uploaded Goggle Earth view 1995. It looks like the projection booth is still being used.

Looks like there is a soccer goal near the box office in the above photo?

Yes, there is a soccer goal near the box office. The Aliber Soccer Complex is next door.