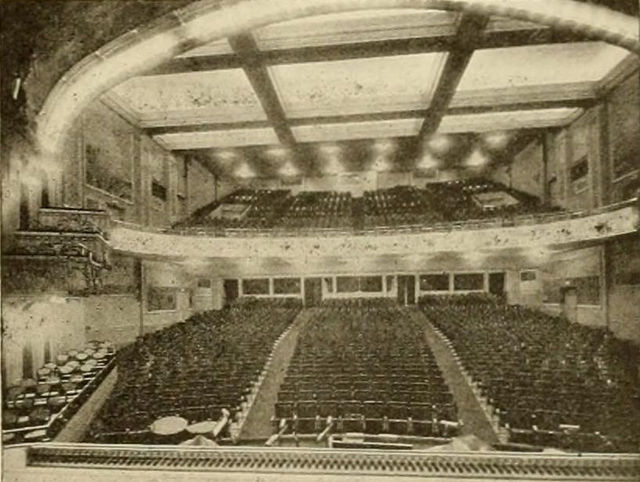 The Orpheum Theatre opened in November 1914. It was renamed Empress Theatre in 1915. In 1916 a Wurlitzer 4 manual 33 ranks organ was installed and it was renamed Broadway Theatre by its new operators, T & D Jr. Enterprises. Later in 1916 it was renamed Liberty Theatre. In the late-1920’s or early 1930’s it was renamed Music Box Theatre. Later going back to the Liberty Theatre name it was remodeled in December 1938 with architect Benjamin Marcus Priteca as consulting architect. It was closed in January 1959.

The PSTOS page about the Liberty Theatre appears to contain errors and certainly omits some early information about the house. The organization itself has another web page with two vintage postcard views of the Liberty when it was the the Orpheum Theatre, clearly identifiable as the same building in the 1946 photo of the Liberty linked by Lost Memory immediately above this comment.

I don’t know where PSTOS got the information that the theater had been built in 1916 for T&D, but that circuit, based in San Francisco, was indeed operating vaudeville houses in California during that period. Perhaps they had some sort of arrangement with the Orpheum circuit to present Orpheum vaudeville and use the Orpheum name.

In any case, the Liberty was taken over by Jensen and Von Herberg by 1917, and was operated in later years by the Evergreen-Hamrick combine, and then by John Hamrick Theatres. Hamrick had the house extensively remodeled in 1952.

From Boxoffice Magazine, March 1, 1952: “The Oregon premier of ‘Quo Vadis’ this week also marked the reopening as a first-run house of John Hamrick’s Liberty. The theatre is now known as the New Liberty.”

Deborah Kerr was among the guests appearing at the opening, which was broadcast on local radio.

We can add another aka for the Liberty. Before 1935 it was called the Music Box Theatre. About three quarters of the way down this web page depicting numerous Portland Theatres is a view of Broadway south from Stark with the Liberty Theatre in the foreground, but the signage identifies it as John Hamrick’s Music Box Theatre. The same page has two other photos of the building, an early one depicting it as the Orpheum and, near the bottom of the page, a 1946 photo of it as the Liberty.

The photo of the Liberty as the Music Box looks like it dates from the very late 1920s or the early 1930s. It would have to have been before 1935, when the Music Box name was moved to the former Alder Theatre.

A wonderful theatre. First run films, they showed a lot of classic sci-fi and horror when it opened. It was open all night! It closed in 1958. The last film was, ironically, “I Want to Live.”

The theater in the article Tinseltoes linked to is the Liberty. It identifies two more AKA’s for the house. It opened as the Orpheum in November, 1914, then briefly became the Empress. In May, 1916, the house was leased to the T&D circuit and renamed again. Later that same year the house had become the Liberty, so it had four names in about two years.

As the S&C operation began falling apart, Considine shifted the Orpheum shows to another house in Portland and shifted the Sullivan & Considine shows from the circuit’s Empress Theatre to this house, which was renamed Empress. The Sullivan & Considine circuit was gone by 1916, and many of its theaters were taken over either by Loew’s or by Alexander Pantages. As this house was only leased, the original owners were probably the ones who leased it to T&D.

Interestingly, the Empress Theatre, which Sullivan & Considine had opened in 1913, eventually became the last Orpheum Theatre in Portland and is listed at Cinema Treasures under that name. Thus Portland had two theaters that each used both names, Orpheum and Empress, at different times.

The Seventh Street/Broadway theatre row is one of the most confusing entertainment districts as far as history and name changes of venues are concerned. By the way, the Liberty Theatre closed in January of 1959 according to the local OREGONIAN newspaper.

The theatre indeed housed a Wurlitzer organ, installed in 1916; and two more Wurlitzer instruments thereafter. The last one—installed in 1918—was the gigantic “demonstrator” organ that proved to be the largest Wurlitzer west of the Rockies until 1929. It was a huge success and was primarily responsible for Wurlitzer’s dominance in the Oregon theatre organ market. The theatre sat around 2,200, but the organ was decidedly huge for that size of auditorium. Organs of its size typically spoke into auditoriums twice that size. Wurlitzer voiced the organ to work within it, but it was still very much a lion—albeit a caged one.

The November 26, 1938 issue of Boxoffice had news about the Liberty Theatre:

“Hamrick’s Liberty Theatre closing for a complete renovation from December 8 to 22 with B. Marcus Priteca of Seattle as consulting architect. Electrical Research products installing the new marquee.”