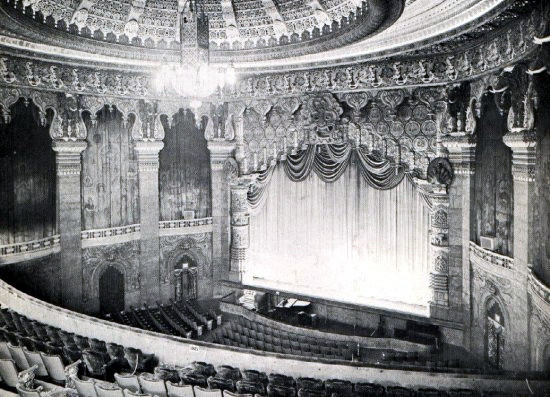 The Oriental Theatre opened on December 31, 1927, designed by the firm of Thomas and Mercier. The theater could seat 2,038 and was located in the East Portland district. While the exterior was fairly subdued, designed in an Italian Renaissance style, it was its lavish Oriental style interior decoration for which the Portland Oriental was most famous.

The wildly exotic, almost surreal appearance of the auditorium and other interior public spaces was created by interior designer; Adrien Alex Voisin, borrowing Asian influences from India, Indochina, and China, among others. The columns on each side of the screen were said to be based on the Temple of Angkor Wat in Cambodia. Over the proscenium arch, was a huge stylized face, which had a wide open mouth baring fangs and eyes lit by red lightbulbs that would glow demonically before a show began.

On the side walls and over the arch were life-sized plaster elephants, as well as apes, fishes, and mythological creatures, seemingly ready to pounce off the wall. Hindu deities decorated the lobby and mezzanine areas, and the main staircase leading to the balcony was flanked by a pair of huge dragons.

The auditorium was topped by a vast dome, from which hung a tree-sized Far Eastern style chandelier.

The Oriental Theatre contained a 3/13 Wurlitzer organ, a full orchestra pit, and spacious stage, large enough to accomodate the biggest stage shows of the day. In addition, the Oriental had luxurious lounges, smoking rooms and even a nursery in its basement.

Though the theater turned to a movies-only format by the 1940’s, and lost its towering vertical marquee in favor of a more modest marquee not long afterwards, it remained a city showplace for years.

In 1969, no longer able to afford staying in operation, the Oriental Theatre was closed, and everything inside auctioned off, including the Wurlitzer organ, which was later broken up (but its console is now in a restaurant in Vancouver, Washington.) A year later, the amazing old theater was tragically demolished to make way for another parking lot, an irreplaceable loss for the city of Portland.

The color pic posted by tc is very nice. What I hope to find is a color pic of
The grand lobby with the stairway and both dragons on both sides of the
Stairs.

Well it’s dec 31, 2010. If the oriental was still with us she would be turning
83yrs old tonight!! There are still a few ranks of pipes from her wurlitzer
Theatre pipe organ that live on to this day.

Dennis Hedberg spent many yrs taking care of the Wurlitzer Pipe Organ in the Oriental. Mr. Hedberg removed the Organ before the Oriental was razed in early 1970. You can find much more info on the Portland Organ Grinder web site were the Organ was installed from 1973 threw 1996. The Oriental Organ was enlarged from it’s original 13pipe ranks to 48 by the time the 1980’s came around. What a masterpiece this Wurlitzer was both serving the Oriental Theatre with it’s 13ranks to it’s time at the Portland Pizza Parlor entertaining folk’s nightly with it’s unmatched magical sound!!

Dec. 31st, 1927 grand opening ad is in the photo section for this theatre.

There was a film made it 1970 titled Before The Dark. It is all about the Portland Oriental Theatre. A copy of the film was posted on youtube in early July of this year. This film is very rare!! I have been looking for this film for over 5 years and now here it is online!! Be sure to check it out!!

It is unbelievable that a theatre of this elaborate beauty would ever be torn down. More majestic and lovely than the famous Chinese in Los Angeles by far. It is in the same league as the 5th Avenue in Seattle. May have been even more spectacular. I never was able to actually see it in person.

Well 87 years ago tonight Dec 31 1927 the glorious Oriental Theatre opened. It was a cold rainy windy night. With over 2,000 people in line to get a first look inside this masterpiece one of a kind theatre. With house Organist Glenn Shelley filling the night air with the sweat sounds of the Oriental’s Mighty Wurlitzer Pipe Organ this truly proved to be a night that would be remembered for a very long time. I would also like to point out to folks that the Oriental Theatre’s Wurlitzer Pipe Organ was the very same Theatre Organ that was installed in the Organ Grinder Pizza Parlor that was open from 1973 threw 1996. The Wurlitzer was taken out of the Oriental before the theatre was torn down in early 1970.

It is a unfortunate this theatre is gone. It is a favourite of many who saw it in person and through photographs by those who never did. It was a truly wild theatre architecturally. The problem with the Oriental was its location. It was built in anticipation of a business district that never really developed. I visited Portland again a few years ago and the Oriental’s original location is still something of an odd one given the layout of the area. Numerous theatres suffered from this situation and were the first to be torn down as result.

The Oriental Theater was truly a one of a kind. If there are any folk’s that grew up in the Portland area Who remember going to the Oriental for that Saturday afternoon Movie or the concert’s that were given in the mid to later 1960’s On the theater’s might Wurlitzer pipe organ that later was installed In the portland organ grinder pizza parlor from aug 1973 threw Feb 1996. Please share with us, its very important to keep the memories a live Of a very special magical time of a by gone golden era of the movie palaces Of the past………………