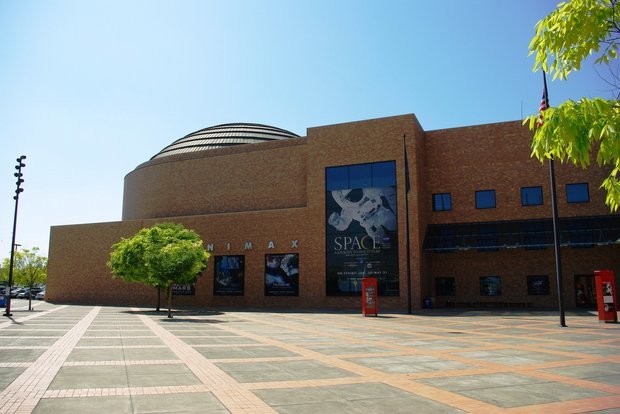 Located near the Oregon Museum of Science & Industry (OMSI) in Portland, Oregon, this theater shows mostly documentary movies and for a while, IMAX versions of Hollywood fare. In 2013 it was renamed Empirical Theater.

This is to Oregon what the theater in LSC is to NJ.

How does this theater compare with the one on the East Coast in Jersey City?

No longer has the dome, either. Replaced with a big flat widescreen (61' * 40", It’s not IMAX 1.4:1.) No longer showing 15/70; now showing video with ATMOS 8-track audio. Dual Christie 4K video projectors, which is at least an improvement over the current generation of LieMAXes.

I read an article published shortly after the reopening which had a comment from one of the engineers saying something to the effect of the dome could have just as easily been kept (and used), but OMSI bean-counters insisted that it go, for undisclosed reasons. If I find it I will post the URL in another comment.

I saw “The Dream Is Alive” and “Blue Planet” here last summer for the first time since I was a kid (so ~20 years), and had virtually none of the immersion or impact that seeing them on the dome had. The ATMOS audio was kind of a nice upgrade from the limited/outdated IMAX 6-track system. But that’s about it.

How does it compare with other lie maxes like AMC?

Don’t know, I’ve never been to an AMC Liemax.

It’s sort of like it used to be, just without the impact of the awesome dome screen engulfing your entire field of vision, or the sense of awe you’d get first seeing it upon emerging from the entrance way. The auditorium itself is definitely much bigger than anything you’d find in any multiplex since they did retain the several-storeys high, steeply-raked stadium arrangement.

Like I said earlier, the only good thing to come out of it is the audio system finally got a much-needed upgrade from the painfully outdated (but state-of-the-art in the 1960s) IMAX 6-track system that preceded it. The flatscreen conversion robbed it of the magic and grandeur it once had. I would have loved very much to have seen a 15/70 DMR of “Koyaanisqatsi” in there, particularly struck from the IRE 1.33 release. There was “Chronos” (on an Omnimax fisheye print, yet) so all was not totally lost, and it still gave you an idea of the sort of lose-your-mostly-cherry-Pepsi-lunch motion you could have expected the former to have in that environment, except its impression of “The Grid” was much too short. But I digress.

They got rid of the doghouse in the middle of the auditorium (no longer necessary) and now all projection is done from where the bank of slide projectors used to be (anybody remember their “The Big Red Button” preshow in the early 90s?) behind the back row.