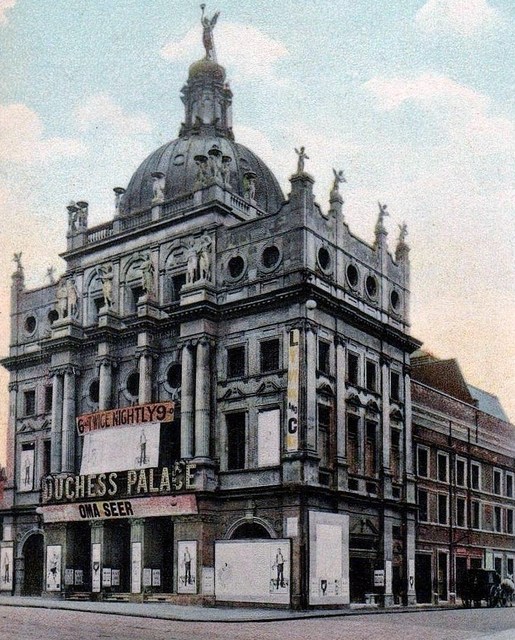 The Royal Duchess Theatre was located on Balham Hill at the corner of Yukon Road in the southwest London inner-city district of Balham, although due to its position at the northern end of the High Road on Balham Hill, it was actually more in South Clapham, rather than Balham.

Built as a drama theatre, the Royal Duchess Theatre was opened on 18th September 1899 with "The Geisha" starring Hayden Coffin. The flamboyant Beaux-Arts style exterior was topped by a huge copper dome which was surmounted by a cupola, upon which was a posed a Classical winged figure.

Inside the auditorium 1,268 seats were provided; 106 in the stalls, 450 in the pit, 86 in the dress circle, 160 in the balcony and 410 in the gallery. Several boxes seated a total of 56. The theatre was built for London Theatres of Varieties and Barrasford Ltd. and was designed by noted theatre architect W.G.R. Sprague, who was named as manager between 1900-1903.

In 1909, it was re-named Balham Hippodrome Theatre, becoming a full time cinema from 1912 until 1915, under the management of Charles Gulliver. As more purpose built cinemas began to open, the Hippodrome Theatre reverted back to variety theatre use, and stars who appeared here include Sophie Tucker and Billie Williams. Touring stage productions were also programmed.

The Hippodrome Theatre was badly damaged by a German bomb during the early part of World War II, and it was closed, never to re-open. The remains of the building lingered on, until it was demolished in the 1960’s and a large block of council flats was built on the site, known as Balham Hill Estate.

My friends and I used to play in the remains of the basement of this theatre just after the war.It was one of many “bombsites” where I grew up in Balham, and today “health &safety” would have a fit(as my mum would say).