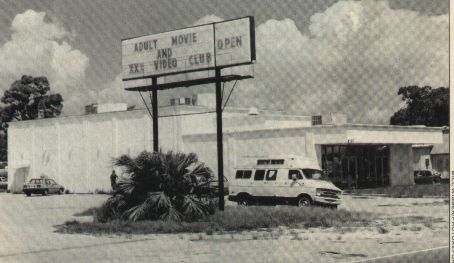 Opened as the Jerry Lewis Cinema July 12, 1972 with “Fiddler on the Roof”. In 1973 it was renames South Trail Cinema, and soon functioned as an adult theater, catering primarily to Sarasota’s elderly audience.

It briefly flirted with First-run-, Second-run, and Classic movies around 1981, with disastrous results. It even attempted giving away beer and pretzels to get audiences, but only got 6 audience members. It returned to adult movies.

However, the South Trail Cinema came into the limelight on July 26, 1991. Entertainer Paul Rubens, best known for his Pee Wee Herman character, was arrested for indecent exposure during a screening of "Nurse Nancy," part of a triple bill.

It was demolished in 1995 and a restaurant now sits on the site of the South Trail Cinema.

I saw Jon Voight’s “The Champ” there in 1979, obviously during the theater’s non-porn operation.

The restaurant on the site today is Mellow Mushroom. Formerly Beckham’s On The Trail Bar & Grill.