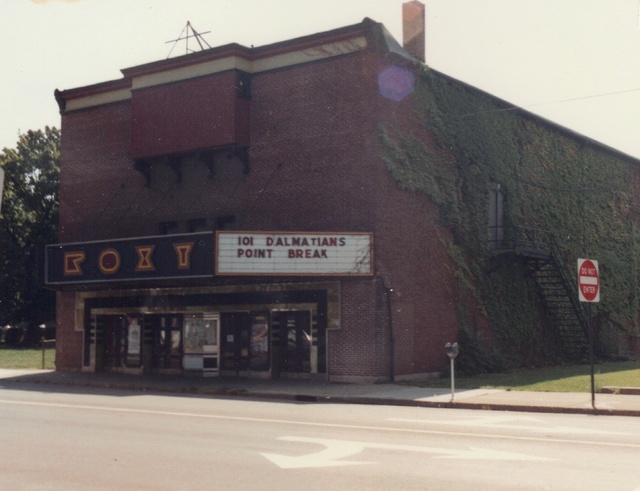 Built in 1924 by George Huff as the Dreamland Theatre, later renamed the State Theatre in 1928, and finally became Roxy Theatre in 1931. It was a single screen 811-seat theatre with a balcony. The Roxy Theatre was the headquarters of the Stiefel Brothers Roxy Theater Circuit.

A second building was constructed next door in 1999 added 2 additional screens, accessible through the lobby of the original theatre. The main original screen today has 278 seats in the orchestra level and 70 seats at tables in the balcony.

The Roxy Theatre’s interior is a beautiful example of the Art Deco style. Two huge Art Deco murals were added by an Italian painter in late-1930’s on the interior walls of theatre. They were nicely restored and repainted in 1998.

Just look at that photo. The manager should be ashamed, how about featuring the titles of the movies playing? What a shameful, lazy way to present a marquee. So typical of todays thinking, in the good ole days a marquee would NEVER look like that.

You know, I always try to stay positive in my comments on this site, but Vito has a point. When I see a marquee with some variation of “call for information”, I get the sense that the theater isn’t “really” open. Managers, that marquee is your first, and often only, impression. Keep them current and attractive.

In defense of the Roxy, they do show the movie titles on the sides of the marquee. My photo got cropped so that you can’t really see the sides.

Here is a better view of the side of the marquee:
http://community.webshots.com/photo/73970141jJDiAV

Thanks TC that’s much better, I like the centering of the titles,
Well done!

There used to be 2 other theaters in Lock Haven. The Garden, and The Martin.
The Martin burned back in the 60’s.
Both the Garden and The Roxy were closed for a bit between the 70’s and 80’s.

The Garden was newer than the Roxy, but the only consessons were Popcorn, and candy from Vending machines. They had an intermission during matinees, where they drew numbers from ticket stubs, and you could win cash. The Garden closed in the 80s. In the 90’s it was purchaced by the county, gutted to the shell, and now houses its offices. The Courthouse is across the street, on the other side of a parking lot. Its now 3 stories, and they saved the tin ceiling, that is viewable on the third floor. From the picture posted of the Roxy, it would be on the opposite corner, to the right of the photo. The building no longer resembles a theater.

The Roxy was the cooler of the 2 when I was growing up. You could get soda, and consessions from an actual consession stand with an attendent. In the 80s, seeing a movie there was bad, due to a bad sound system, and a dirty screen. It was purchaced by the present owners, and remodeled. Access to the Balcony is now restricted, and the restrooms were moved from the second floor to the first. That pretty much spoiled the grandure of the lobby. The murals that were restored are fantastic. For years you couldnt make out what was depicted. The sound system was replaced by the one from the Garden.

One cool fact, is that when the theater was built, there were bits of reflective mirror-like glass inlayed in the sidewalk, that were lit up by the Marquee. All and all, the new owners have dont a great job with the building, and it is now a pleasure to see a movie there again.

I recently purchased seats that were removed from the Roxy theater when it was remodeled a few years ago. I am trying to purchase older photos and info of the theater to frame and place in my home theater when the seats have been restored and the room is complete. Any and all info. would be appreciated. Thank you. The gentalmen I purchased the seats from has some seats left over if anybody would like to purchase seats I could pass along his info.

Once again in defense of the marquee, the current showings are on the sides because the front faces another building across the street and people on the street aren’t going to have much time while walking by to turn their head and see it. The facade is on a one-way street so people coming up the street see the side of the marquee on the left of the photo and the building is on a corner so people stopped at the intersection to the right of where the photo was taken see the marquee on the right side (a straight on view from that angle) This also allows pedestrians walking on the sidewalk on the side the theatre is on to see the showings, as they wouldn’t be able to otherwise because the marquee is over their heads. I don’t know much about the Garden, but the county recently renovated their offices again so it probably doesn’t look much like a theatre (it is a nice building though). I don’t know anything about the Martin, so please let us know where it might have been located. And in response to the Roxy seats, when the theatre got new ones in the late 80s-early 90s, most went to the Millbrook Playhouse in Mill Hall. They were horrible for larger Americans as the cupholders made it tight. They also looked like cinema seats and didn’t match, so in 2006 they were removed and replaced by theatre seating from a renovation New York. A friend of mine has 3 and we took the rest to the landfill in McElhatten as many people felt we should keep them for sentimental reasons- too collect dust? Finally, there was an old opera house on Main St. (it was called the “opera house”, doubt there was actaullay opera) that burned in 2005? and is now a parking lot. Any info on that?

Lock Haven’s downtown business district was heavily damaged by flooding from Hurricane Agnes during June 22-23, 1972. Both the Roxy and the Garden theaters were closed for over 6 months while repairs were made.