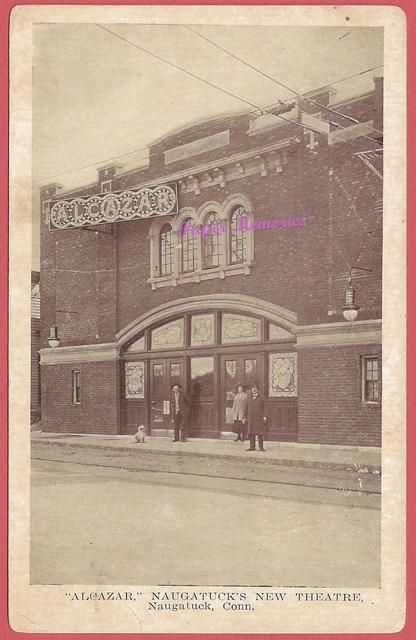 Here is a photo from a contemporaneous news story in January 1952:
http://tinyurl.com/cjvwws

The timing and location are right for the following announcement in the “Building News” section of the January 8, 1913, issue of The American Architect to have been about the Alcazar Theatre:

A book called “History of Waterbury and the Naugatuck Valley, Connecticut,” published in 1918, presents a glowing description of the Alcazar in its early years:

“The Alcazar theater, conducted by George F. Rabbott, is one of the most attractive amusement houses of Naugatuck and in fact is a most conspicuous monument to the silent drama. It is splendidly housed in a building that was constructed expressly for the purpose in 1913 by F. H. Brothers, of Waterbury, and the new theater first opened its doors to the public on the 30th of August of that year. It is located on North Main street, a few doors from Maple street, and the building is handsomely designed. It is fifty-two by eighty-five feet, two stories in height, and the most perfect ventilation system has been installed. This includes an exhaust fan forty-eight inches in diameter which is capable of renewing with fresh air each cubic foot of space in the building every four minutes. The theater has five exits on the ground floor and there is also a spacious and attractive lobby. The seating capacity of the house, including the gallery, is about seven hundred. A Mirroroid screen has been installed and the projection of the pictures is absolutely perfect, due largely to the use of two of the newest and most expensive type of motion picture projecting machines and also to the skill of an expert operator. Thorough study of the situation on the part of the management has led to the most absolutely perfect results that can be attained. The booth from which the pictures are projected is situated in the gallery and is of steel and asbestos construction, thus being absolutely fireproof. An orchestra of from five to eight pieces furnishes a musical program in keeping with the high class of entertainment provided. The management of the theater has followed the policy of exhibiting only pictures of the very highest standard in which the leading film actors are represented. Many attractive serials have been presented and the production is at all times of the highest grade, such as would prove attractive to the most cultured taste.”The portion of North Main Street on which the Alcazar Theatre was located has been wiped out by a modern highway. Google Maps places its pin icon a considerable distance north of the actual location of the theater.

The building suffered serious damage as the result of the 1955 flood, and had to be taken down. The Route 8 highway goes over the spot where the Alcazar had been.

The Alcazar was on the decline. I have heard from others that parking was the problem. Another theater, The Salem, on Church St. had opened and was adjacent to a municipal parking lot. The Alcazar was located on North Main St., Route 8, in a heavily concentrated business area with very limited on street parking. However until 1937, the trolley line ran through the valley in front of the theater. It was replaced by a bus line.

I remember going to the Alcazar. I was a small theater with a balcony. We would go to visit my Grandfather in the projection booth and I would watch him load the projecctors and do the change overs.

My family has some memorabilia from the Alcazar. Several movie posters from the late 1940’s, projectionists diarys of the movies shown (for the Alcazar and other theaters,) I have a lens from one of the Alcazar’s projectors. We still have dishes that we use that were given away on “Dish Night.” My grandfather’s projectionist licenses.

The night of January 30, 1952 we were awoken by a middle of the night telephone call from my Grandfather to my mother “The Alcazar is on fire!” My mother bundled me up and my grandfather came to get us and we went to the scene of the fire. By then, it had “gone through the roof” We watched it for a short time and went back home to bed. It was a very cold night. I saw the ice covered burned out hulk the next day.

The remnants of the building remained from a few more years. You could walk up Oak Street, a inclined street behind the block and look down into the auditorium. The roof had collapsed and you could still see the seats and what was left of the balcony.

The flood of August 19, 1955 rampaged through the area, the Naugatuck River was accross the street from the theater and washed away all the businesses on North and South Main Streets. Business blocks were torn down and vacant lots were left.

Sometime about 1959 or 1960 Route 8, the North – South highway, up the Naugatuck Valley was constructed as a 4 lane highway and what was left was demolished and a overpass was constructed.

Every so often when I visit my Mother, in her 90’s will give me lunch and serve it on an Alcazar plate.