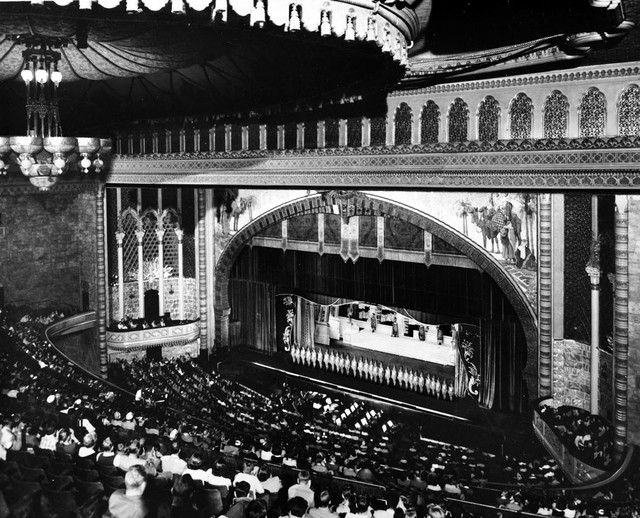 Built with a seating capacity of 6,717, this is America’s largest theatre, even with its now current seating capacity of 6,308, it still beats the 5,940 capacity of Radio City Music Hall in New York City. The Shrine Auditorium was built as a replacement of the smaller 1906 built Shrine Auditorium, which burnt down in 1920. Money totalling $2.5 million was raised between 1921 and 1924 by public subscriptions as well as from the Ancient Arabic Order of Nobles and the Mystic Shrine, and it was first known as the Los Angeles Civic Auditorium. Later, the Al Malaikah Temple branch of the Shrine re-purchased the public shares and renamed it the Shrine Auditorium. They still own the building today.

The Shrine Auditorium opened on January 23, 1926. It was designed by John C. Austin & E.M. Edelman, with the interior designed by noted theatre architect G. Albert Lansburgh. The exterior of the building resembles a gigantic double-domed Middle Eastern mosque. Built of poured concrete, the building covers almost 3 acres and it took almost two years to complete. There is a basement under the entire building area, and further facilities are on the left-hand side of the building which houses an Exposition Hall. This vast area alone measures 150 feet wide by 250 feet in length with a main floor, a basement and mezzanine levels. The facilities here include a sprung dance floor and kitchens.

Inside the main auditorium seating is provided on orchestra level and a huge cantilevered balcony, which actually seats more than the main orchestra floor. The decoration is in a Moorish style with hardly any decoration on the side-walls up to the cornice. There are decorative organ grilles and a large box located on each side of the proscenium. The ceiling is formed like a gigantic decorated tent measuring 192 feet across. Made of concrete, it weighs 1,870 tons. From its center hangs a huge crystal chandelier weighing 5 tons. It is 20 feet in diameter, 28 feet long and has over 500 light bulbs in four colours; white, red, blue and amber, which uses 64,445 watts of power when fully lit.

The proscenium arch is 100 feet wide and 36 feet high, and there is a smaller chandelier which hangs in the centre of the anti-proscenium ceiling. The fire curtain has an elaborate Moorish scene painted on it and there are two desert scenes with camels painted on them in the top two corners of the proscenium arch. The stage is larger than Radio City Music Hall in NYC, here at the Shrine measuring 192 feet wide and 72 feet deep. There are two ‘star’ dressing rooms at stage level, eight on the 2nd level, three on the third level and two large chorus room under the stage. The gigantic Moeller 4Manual/67Ranks organ has 4,663 pipes, and is one of the largest built. It is still played on special occasions.

The Shrine Auditorium became a full time movie theatre for a short period, opening on August 25, 1928 with a silent double bill programme; Marion Davies in "The Fair Co-Ed" (1927) and Edmond Lowe in "Dressed to Kill" (1928).

Over the years it has served as the location for movie shoots, the most famous being in 1932, for RKO’s "King Kong", when it ‘stood in’ for the Hippodrome Theatre, New York where King Kong was chained up. ‘The Eighth Wonder of the World’ broke loose from the stage to terrorise the city. In 1954 in Warner Bros. "A Star is Born", Judy Garland appeared at the ‘Night of Nights’ opening sequence of the movie and returned for the final reell to utter the immortal line; ‘This is….Mrs Norman Maine’. Other movies filmed here include Shirley MacLaine in "The Turning Point", Goldie Hawn in "Foul Play", "Naked Gun 33 1/3 - The Final Insult" and "The Bodyguard" with Kevin Costner and Whitney Houston.

In 1993, a $15 million improvement plan was completed which included a new multi-level parking facility, a complete overhaul of the stage with new computorised equipment, new lighting and sound systems, new air conditioning and heating systems, plus many other improvements to the building. Because the Shrine Auditorium has lost out on hosting the Academy Award Ceremony to the new Kodak Theatre in Hollywood since 2001, it received a $4.5 million upgrade in 2002. New seating was installed and the surrounding street and sidwalks were improved, to ‘woo’ the Oscar’s back to the Shrine, which has twice the seating capacity of the Kodak Theatre. To date (2009) this has not happened.

The Shrine Auditorium has survived the past 80+ years, having been shaken by numerous earthquakes, enduring riots and even a plane crash in 1947, when a secret un-piloted Navy plane smashed into the Shrine’s roof near its south west cupola and burned. No-one was injured - but no-one explained the mishap! Even Michael Jackson survived a singeing when filming a Pepsi Cola commercial here in 1984, he was taken to hospital when a pyrotechnic effect went wrong.

The Shrine Auditorium is designated a Historic Cultural Monument.

OK, welcome Shrine Auditorium. Hard to miss this place when you’re on the 110 Freeway by USC. Thanks for the intro, Ken.

Here is an undated photo from the USC archive:
http://tinyurl.com/ctx93h

Here is a January 1950 ad from the LA Times. Jan Peerce was one of my dad’s favorite singers, along with Al Jolson.
http://tinyurl.com/owldvf

The world premier of Star Wars The Last Jedi was held at the Shrine Auditorium last night.