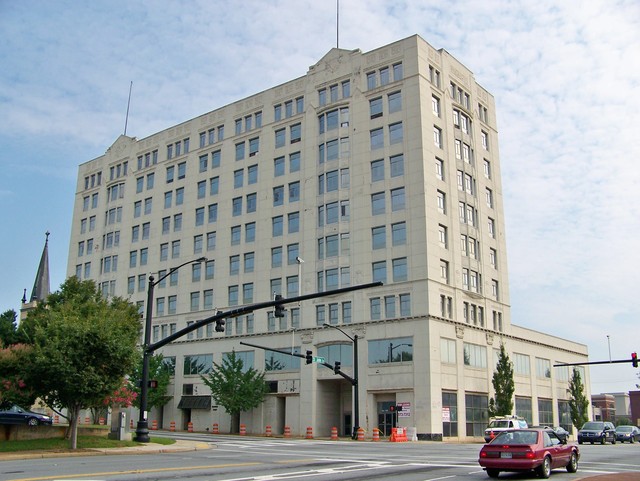 The historic Carolina Theatre (formerly the Montgomery Theatre) in Spartanburg, South Carolina was built in 1925, incorporated into Spartanburg’s ten-story Montgomery Building office complex. Designed by the Lockwood and Green architectural firm and originally operated by the Publix chain, it has been described, when built, as “The Finest Theatre in South Carolina.

It is now the only surviving theater in Spartanburg.

Intended to be equipped with a theatre organ, organ chambers and associated wiring and air duct lines were incorporated into the design, but an organ was never installed, a white grand piano being used in it’s stead. The theatre is now owned by the Spartanburg Realty firm, Cleveland-White, Inc. Plans are underway to restore this classical movie palace to its original splendor.

Anyone have photos they could contribute?

So many old theatres especially in the south were visited by Mr. Presley….now he is gone and so are many of these theatres. A theatre in Charlotte NC also named Carolina Theatre was visited by Elvis, too. The downtown building still exists, but the theatre is in need of a complete restoration. A group called Carolina Theatre Preservation Society (CTPS) is active in this venture.

I have a photo of the Carolina Theater taken at night. When
the photo submission feature is upgraded, I will submit it
to the site.

I think in the Fifties alot of theatres were hosting local rock and roll groups to play on stage.I know the Imperial in Augusta did along with the Modjeska.Spartanburg’s Carolina theatre was doing much the same thing for the locals.Nov 2 1956 Friday night Late Show on stage “CLIFF MAC’S ROCK n ROLL REVUE OF 57” was playing on stage with a feature to follow,“RUNNING WILD”,Admission,rather high,was Seventy-five cents.

They had started redoing the Carolina a few yrs ago. Google it.Plans changed unfortunately.My brother has some photos of inside.Where the black wroughtiron railing over concession stand for balcony(I loved!!)had been painted white. I’ll try to post.Loved that place! what yr. did it close?