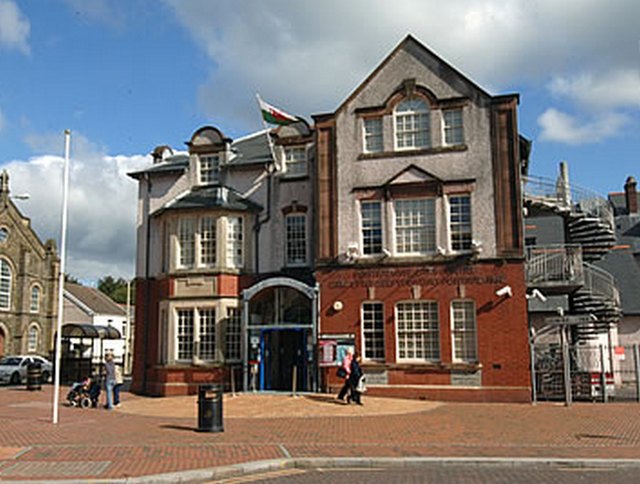 Located in this small town in the Upper Swansea Valley, north-west of Swansea. The Public Hall opened on 11th July 1908, with the main hall seating 1,500 in stalls and balcony levels. It was opened by famous opera singer Adelina Patti, whose home, Craig y Nos Castle was 10 miles north of Pontartdawe. The cinema was located in another smaller hall in the building which had a seating capacity for 650 mainly on the stalls level, with a small balcony. The cinema opened in 1909. Programming included pictures and variety.

The Public Hall Cinema was closed in the early-1960’s, the first of the towns three cinemas to close.

Following a refurbishment, it re-opened on 16th Januarty 1997, it was transformed into a muli-purpose arts centre, and the main auditorium was restored to its original design.

The first of Pontardawe’s three cinemas to close was the Pavilion in Church Street. It was certainly closed in the early 1950s. Unusually for the Swansea Valley, the Public Hall was a facility that was mainly supported by voluntary subscriptions (6d a week) deducted from the wages of workers at the nearby tin plate works and not by coal miners or the the NUM.It was the closure of the tin plate works that led to Pontardawe becoming an unemployment black spot and the Public Hall to suffer severe financial difficulties.