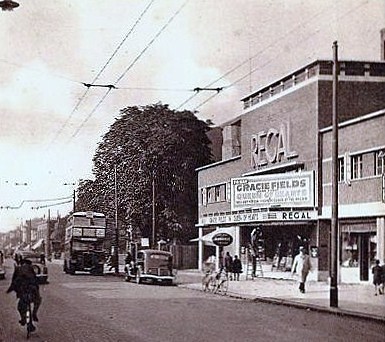 The Regal Cinema was built for Mortimer Dent, who operated a chain of cinemas in the Birmingham area. It opened on 3rd September 1934 and within a short while, it was being operated by Sidney Bacon Pictures.

The Regal Cinema recieved a direct hit by a German bomb on its organ chambers in 1943. The damage was patched up, but the organ never played again, and in 1948, the undamaged console was removed from the building.

The Cannon was closed on 19th March 1987, and the last films shown were “Crocodile Dundee”, “Soul Man”, “Whoop’s Apocalypse” and “Deadly Friend”. It was soon demolished in May 1987. A supermarket was built on the site, today it is an Asda store.

Two vintage photographs of the Regal Cinema’s auditorium:
In 1934;
View link
Viewed from the circle in 1938:
View link

An excellent set of photographs of the ABC/Cannon in its final years and eventual demolition:
View link

Up to quadrupling in 1978, the cinema could be let for a week to Amateur Operatic societies. This had to be booked well ahead, so sometimes a strong ABC release had to be passed over, such as “Zulu” and some early Carry On films. The Odeon, Erith or Granada, Welling happily screened them instead.

An opening programme dated Sept 1934 is held by the Kent MOMI Museum in Deal, Kent